Year over year, we see reports with scary titles like “nearly all mobile malware is targeting Android” and “472% increase in Android malware since last quarter”. There is no doubt that mobile malware is on the rise, especially on Android, but the issue is overhyped. Just as they did late in 2011, IT security firms are creating FUD (fear, uncertainty, doubt) about the security of Android by releasing reports that paint a bleak picture of the platform.

According to McAfee’s Threats Report: Second Quarter 2012 report, mobile malware saw a 700% increase over last year, Android being the number 1 targeted platform with Symbian in at a distant second. Check out the details over the jump.

McAfee states that mobile malware is no longer at a proof-of-concept level; it is “fully functional and mature”. In their report, they mention the wide variety of methods mobile malware is using to get onto smartphones.

Simple but effective social engineering techniques are used by hackers to convince users to install innocent-looking files (“Android System Update 4.0.apk”, for example) which are actually coded to wreak havoc on their phones, like corrupting all sensitive data on your SD card, sending your personal information to an online server, calling / texting premium numbers,  and joining mobile botnets. Drive-by downloads – where malware is automatically downloaded to your phone when you visit a website – were seen for the first time in Q2 2012. 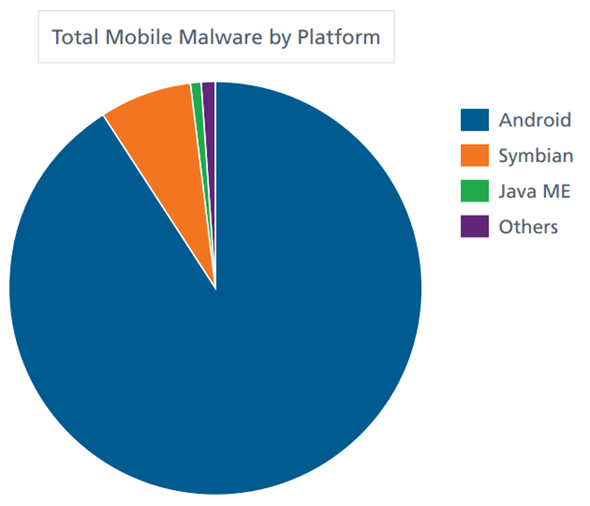 As I always state at the end of news and reports regarding malware on Android, you and only you are the best protection for your phone and personal data. Just stick to downloading apps from the Google Play Store, browse only websites which you know are safe, stay away from installing APKs from sources you do not fully trust, and turn off USB debugging when it is not in use. Read our article on how to keep your Android smartphone safe to learn more useful techniques.

I still believe that there is no need to use an anti-virus app on your Android smartphone, but you can check out our list of Top Antivirus Apps for Android if you want to add an additional layer of security at the cost of device performance.