Here’s how to find max CP (Combat Power) of Pokémon in Pokémon Go: It’s probably fair to say that Pokémon Go has been well and truly established on a huge global scale with mobile device owners from all over the globe polling the servers at Niantic Labs on a daily basis in the hope of finding and catching all of the Pokémon possible.

Catching Pokémon in Pokémon Go is all well and good, and is often enough for most gamers, but if your intention is to battle at the gyms and duke it out with other Pokémon Trainers, then surely your time would be better invested only catching the critters that are capable of being upgraded to seriously high Combat Power (CP) status? If you like the sound of that, then there is a handy list, that has compiled all 150 Pokémon species in ranking order according to the maximum CP possible.

The list contains a total of 150 different Pokémon, with the name of the critter, the maximum Combat Power points it can achieve through powering up, and a ranking score out of ten that suggests how powerful that individual creature can be if the right amount of Stardust is applied.

Of course, the list also contains a number of Pokémon that are not yet available in the game, and as you’d expect, those are the highly sought after mythical creatures that are capable of amassing some of the highest CP out there, such as Mewtwo, Moltres, Zapdos, and Articuno. It’s anyone’s guess as to whether we will see these integrated going forward.

If you are involved in the world of Pokémon Go purely for the sake of traveling around the local area in the hope of seeing and catching a varied amount of Pokémon, then the achievable Combat Power status of each critter probably won’t be too much of a concern for you. After all, that only really comes into play for those gamers who intend on dominating the gym and battling scene. However, if you are all about the conflict, and see no point in having a Pokédex full of warriors without going into battle, then of course, the CP level of those Pokémon is of the utmost importance. 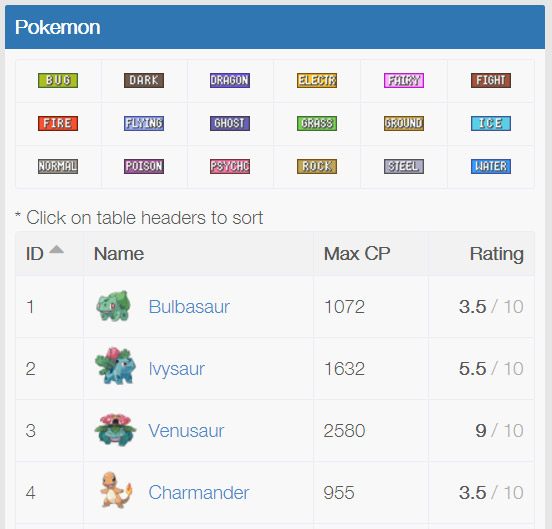 Gamers will have already worked out that CP of each Pokémon grows as the creature is leveled up using Stardust and Candies, but what they might not have realized, is that each Pokemon has a maximum CP level that it can reach. Mewtwo for example, can achieve a whopping 4145 CP, and would therefore be the most difficult to battle against based on maximum CP being achieved if it were part of the game. It’s probably no surprise that Magikarp is the weakest of the Pokémon with a maximum CP of just 263, but evolving that lapsidasical fish to a Gyarados can bring serious CP gains.

Check out the complete list for yourself at pokemongo.gamepress.gg/pokemon-list and see if it changes your behavior when it comes to catching Pokemon.