Mark Zuckerberg has transformed our idea of a social network with a highly addictive platform that many complain about but continue to fully utilize it for numerous purposes. The youngest billionaire most recently became the second youngest person to the Time Magazine’s Person Of The Year. And I am flabbergasted! 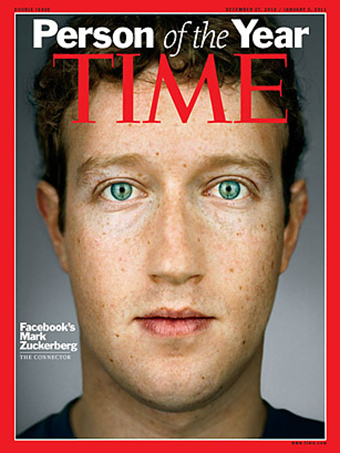 His social network has grown from being a college centric social network to become the largest online network connecting over 500 million users. The net worth of the company is over $33.7 Billion and has already given Hollywood a great story to make a movie on (The Social Network, 2010). That’s for the entire brand, Mark Zuckerberg, a Harvard dropout is worth a a staggering $6.9 billion for a 26 year old.

The reason he has been selected is totally justified, at least in my opinion. Millions are connected through the Internet, the way Facebook truly connects us is nothing short of phenomenal.

“The social networking platform he invented … is the connective tissue for nearly a tenth of the planet.”

“Facebook is now the third-largest country on earth, and probably holds more information than any government about its citizens. Zuckerberg, a Harvard dropout, is its T-shirt-wearing head-of-state.”

For some kids, their questions could be answered with a simple yes or no. For Mark, if he asked for something, yes by itself would work, but no required much more. If you were going to say no to him, you had better be prepared with a strong argument backed by facts, experiences, logic, reasons. We envisioned him becoming a lawyer one day, with a near 100% success rate of convincing juries.

The decision was made by the TIME’s editors and the staff members. The toughest competition for the top spot as TIME’s Person of the Year award came from WikiLeaks founder and owner Julian Assange, who was already voted online as favorite for this award. [via TIME]