Apple’s introduction of the fourth-generation Apple TV and all of the underlying potential that comes attached to it, was a breath of fresh air for developers who have been dealing with a stale iOS App Store ecosystem for a number of years. The availability of tvOS and the Apple TV SDK now allows developers to come up with new and interesting app ideas that will be executed on the big screen in living rooms across the world. It also allows developers to have a little fun and see exactly what the Apple TV 4 is capable of; something that developer Kevin Smith has done, as demonstrated by his MAME Emulator port running on the new set-top-box.

The MAME Emulator, or Multiple Arcade Machine Emulator to give it its full title, has managed to carve itself a cult following over the years due to its ability to emulate vintage and classic arcade-based video games on modern platforms. This type of functionality is clearly something that appeals to Smith, who has gone through the process of getting the emulator up and running on the Apple TV 4 developer kit that he received as part of Apple’s tvOS developer lottery. 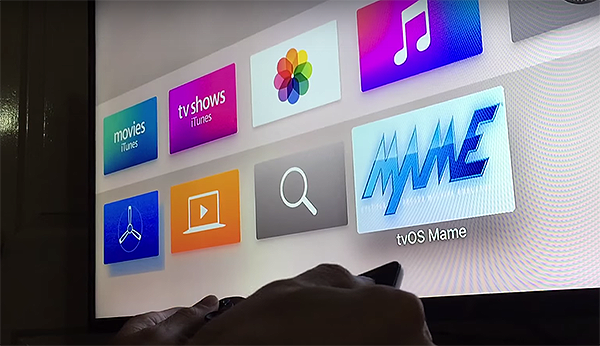 The Apple TV 4 MAME Emulator is based on the iMAME4all project by Nicola Salmoria. That particular project brought the functionality and feature set that comes attached with MAME to all of Apple’s iOS-based devices, such as the iPhone, iPad, and iPod touch. Considering tvOS is based on iOS 9, it makes sense that someone has expanded on that excellent project and introduced the functionality to Apple’s gaming-centric ATV4. As you might expect, it didn’t come without its challenges, as Smith explains:

I created a target for tvOS and set about getting the code to compile for arm64 (Mandatory for Apple TV), fixed a variety of compiler and linker errors. Removed code which was incompatible with tvOS frameworks and simplified code to work on tvOS.

The Apple TV 4 will ship with a new Siri-focused remote control, but the MAME Emulator in this instance is also working with a third-party gaming controller that is connected to the set-top-box via Bluetooth. Before you hardcore classic gaming fans start thinking that you’re going to adopt the new Apple TV purely for this type of functionality it’s worth noting that such a creation will never make it onto the official App Store. The hardware and software is clearly capable of efficiently emulating those old titles, but Apple has historically shown that apps of this nature have no place on the App Store.