One of the primary uses of smartphones today – besides taking photos/videos, receiving/sending texts and calls, consuming content from social networks and RSS feeds – is as an organizational tool; we use it to wake us up in the morning, to keep track of meetings, events and other appointments and, of course, to keep to-do lists.

iPhone users and Redmond Pie readers will be familiar with the recently released and widely lauded Clear app. It’s basically a to-do list app, but the way it works (its user-experience) is something never-before-seen on any platform.

Clear, however, is iOS-exclusive and will remain so for the foreseeable future.

However, a near perfect clone of Clear has been released for Android. Check it out after the jump! 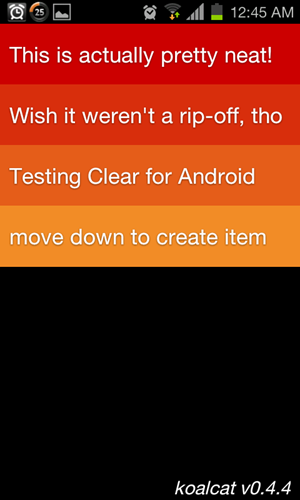 Developed by KoalCat, koalcat’s Clear [Google Play] is a complete photo-copy of Clear for iOS. From the bright color-scheme to the novel gestures and right down to the name, koalcat’s Clear copies everything.

Now I haven’t actually used Clear for iOS myself since I don’t have an iPhone, but from the reviews and hands-on videos I’ve seen of it around the internet, koalcat’s Clear looks and works exactly like the source material.

By that, I mean the app has a minimalist interface with literally no buttons to press. All actions, whether it is adding a task, grouping them, crossing/editing/deleting/moving it etc. etc. is handled through intuitive gestures. To add a task, you simply swipe down. To cross/delete, you swipe the particular task right/left. Similarly, to group tasks, you zoom out using the now-universal pinch-to-zoom gestures. You get the idea. 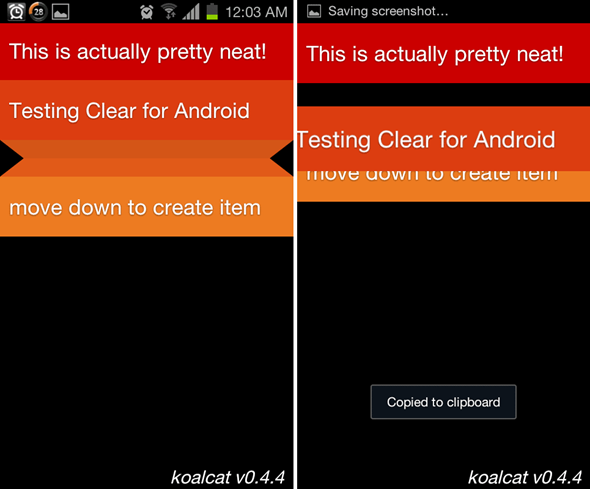 We’ve tested the app on a Samsung Galaxy S II (Android 4.0.3 ICS) and can confirm that it works as advertised. The app is fine when taken on its own, but then you realize it’s a complete copy of Clear which is not a nice thing at all.

A better, more original and much more powerful to-do list app that I would personally recommend to everyone is Any.DO.

Don’t forget to let us know what you think of koalcat’s Clear by leaving a comment over on our Facebook and Google+ page!