AIVC Is Yet Another Siri Alternative For Android: Offers Same Feature-set Along With Extra Niceties On Top

Siri was introduced as one of the three major features of the iPhone 4S back when it was announced in late 2011. As we all know well by now, it is a voice-based personal assistant that lives inside the iPhone 4S which serves all sorts of commands given by the user. Voice commands involving things like setting a reminder/timer, going through latest text messages, firing off an email/text message, getting weather updates etc. etc.

Now, Android users feel left out on how they don’t have a competitive voice-based personal assistant. Keeping that in mind, developers created and released countless apps which aimed to recreate the Siri experience on Android.

If you’ve been following our reviews of these apps here on Redmond Pie, you’ll know that we aren’t exactly a big fan of them for the simple reason that Siri works flawlessly, and these apps don’t. They either skimp on the user-interface/experience or don’t integrate well with the device.

Today we came across yet another Siri-like app for Android. Is it just another voice commands app, or does it actually have substance? All is revealed after the jump!

Developed by YourApp24, Artificial Intelligent Voice Control (AIVC) [Google Play] is a personal assistant for Android which you can use to control your device with your voice. It comes with support for over 15 commands which include both the usual suspects such as checking the weather, sending texts and a handful of unique ones such as integration with Google Translate and Facebook, as well as the ability to launch apps.

Based on features alone, AIVC is one of the strongest Siri-alternatives we’ve seen on Android. However, it loses some points when it comes to the user interface. Unlike Siri’s fluid and intuitive interface, AIVC’s is static and uninspired. The app could use some improvement in this department. 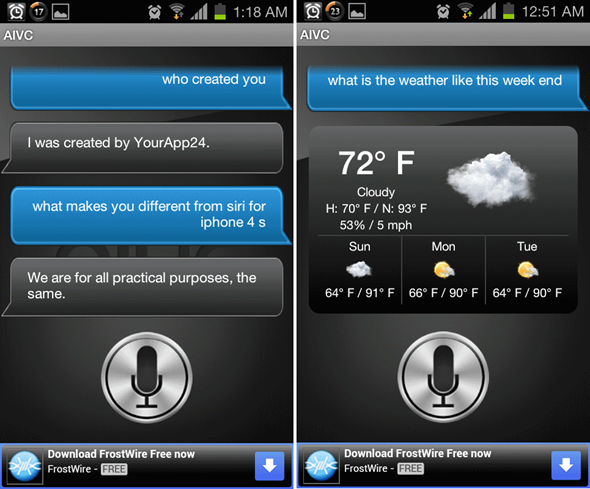 We’ve tested the app on a Samsung Galaxy S II (Android 4.0.3 ICS) and can confirm that it works as advertised. If you’re looking for the best voice-based personal assistant, you need to get an iPhone 4S with the real Siri. Otherwise, you’ll have to stick to apps such as AIVC, Speaktoit Assistant and Dragon! Go which offer similar features but not the same, enjoyable user-experience.

Don’t forget to let us know what you think of AIVC by leaving a comment over on our Facebook and Google+ page!