If there is one thing in which Apple is extremely good at, it is the efficient marketing of their software and hardware that it makes us all desperate to get our hands on it. This is particularly evident by the crowds that descend on Apple retail stores or flood the online pre-order system whenever the annual release of a new-generation iPhone or iPad comes around.

iOS 6 is a giant leap forward for Apple, considering the amount of changes the new major release of the software will bring. Apple has taken the bold leap of building their own advanced mapping system that offers the benefit of 3D mapping and fly-over city tours, as well as efficient turn-by-turn navigation, which in itself involves a major overhaul of the OS. Although users in general will be looking forward to getting their hands on the new iPhone and new software that will come with it, it is perhaps those who jailbreak their devices will be most excited to see what the jailbreak community does in terms of production of new tweaks and enhancements.

With Apple recently pushing out the fourth beta of iOS 6 to developers, it represents a chance not only for developers to test and discover the latest changes, but also those who are involved in the production of new jailbreak tweaks to liberate devices that are running this latest beta. As is usually the case, the iPhone Dev Team are ahead of the game in providing the ultimate freedom to our devices with the latest version of Redsn0w, which is 0.9.13dev3, still capable of jailbreaking the fourth beta of Apple’s sixth-generation release of iOS on A4 capable (iPhone 4, iPod touch 4th gen, iPhone 3GS) devices. We should be aware by now that these beta versions of iOS are intended purely for developers, with the same applying to jailbreaks that are compatible with beta software. 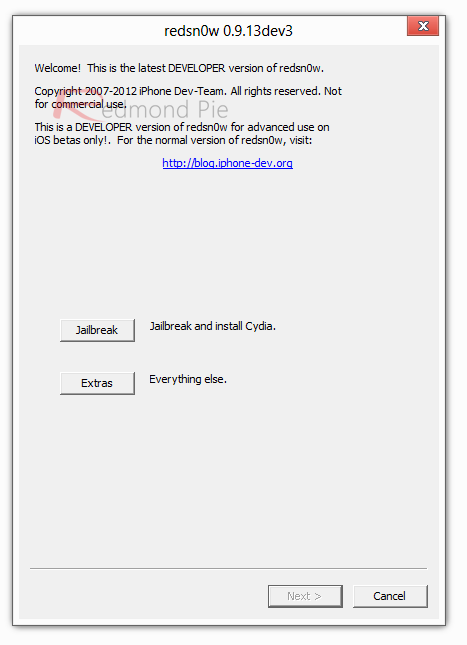 As we move into a new era of iOS and see the evolution of the software first hand, it is extremely positive to see that the jailbreak teams are staying on top of the cat and mouse game with Apple, and are continuing to push out support to the millions of iOS device users around the world who need device liberation.

Jailbreaking iOS 6 on an iPhone and iPod touch is a walk in the park, simply follow our detailed step-by-step guide posted here on how to do so. Simply point Redsn0w to iOS 6 beta 3 firmware from the Extras menu.