There is a new video going around in the wild which shows iPhone 3GS (with new bootrom) on iOS 4 jaibroken using an upcoming version of Sn0wbreeze. This video has been confirmed by iH8sn0w – the developer behind popular iPhone jailbreak tools such as sn0wbreeze for iPhone 3.1.3 / 4.0, f0recast and BlackBreeze as legit.

As of today, Im one of only a handful of regular jailbreakers to be be pwned on 4.0 with a new bootrom 3Gs. That could always change tomorrow, who knows.

and Please don’t ask for a release on this. I’m not planning on it. 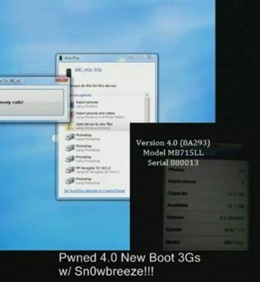 Unfortunately though, there is a little catch to it. 1) it is a tethered jailbreak (whenever you turn off your phone, you will need to re-connect it to a computer to be able to turn it back on) and 2) it will only work for those devices which have their SHSH blobs (ECID SHSH) files for 3.1.2 (NOT 3.1.3) saved on Cydia. This jailbreak also required a special tool for rebooting as shown in the video below.

There is no ETA (Estimated Time of Arrival) on the release. According to iH8sn0w, he will “see if [he] can produce a tool that will do this job…”.

Oh and here is the video which shows iPhone 3GS (new bootrom) jailbroken on iOS 4.

Stay tuned ! We will let you know more on this as the story unfolds!

UPDATE 1: While there has been no word on this working on iPod touches, judging by the nature of this hack (a new payload to pwn iBoot), it should work on iPod touch 3G and iPod touch 2G (MC models) too. But we will have to wait for the official confirmation on this.