An independent Vietnamese iPhone developer by the name of “Thuat Nguyen” currently has 42 of the top 50 books in the iTunes App Store “Books Category”. Most of these books/apps were released back in April this year and have little to no user ratings at all. Well then how are they dominating this iTunes category? It has been reported that a large number of iTunes accounts have been hacked, with as many as $600 dollars being spent from a single account without the consent of the account holder to buy these apps – hence making it to the top of the charts. 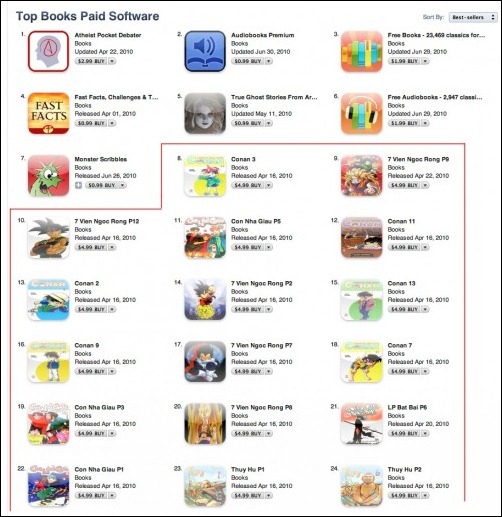 42 of the top 50 Apps in books category is dominated by one single developer.

Yesterday my credit union contacted me saying there was suspicious activity on my debit card. Sure enough over 10 transactions in the $40-$50 area all on iTunes equaling to $558. This is definitely a problem, since then I’ve e-mailed MSNBC hoping they’ll pick up the story and investigate this problem. — srslylia

A small $1.00-$3.00 charge, then random navigation apps totalling around $190.00. Cancelled the card and now working with credit union to get the charges removed.

I will never use my debit card with Itunes again. –tofublock

I also received a receipt via email on my “Purchases” on 7/2/10. I made the mistake of storing my debit card on the itunes store app. I have run into the exact same responses that other users are reporting–only email as a method of contact.

That response was to tell me how to change passwords, etc. – stock answers and to also tell me of no refunds. I was an internet technician for years so the iTunes advise was second nature for me but with little hope for “fixing” the issue since I believe that the breach was on the iTunes server. — beccid63

And this is not just limited to US based iTunes accounts only, some users from UK have reported similar problem.

I’ve just noticed my iTunes account has been hacked in the past week. Someone has downloaded 8 apps and two songs totalling £61.70. The most expensive being an app called All Match by CharismaIST for £54.99! The other apps seem to be based on photographer like Camera One, Night Shot, Camera Flash Ultra. Surely Apple won’t pay out to these developers. I have changed my password and put in an email complaint to iTunes so we’ll see how it goes.

What You Should Do Now?

2. Check your recent purchases history. If any suspicious activity has been found, report back to Apple.

3. Remove your payment/credit card details by setting the “Payment Method” to “None” until Apple has a fix to the problem.