For those jailbroken iOS users who are regular downloaders of files through torrent sites, you will no doubt remember that the tried and tested method of downloading these files was through the iTransmission tweak in Cydia that was developed by Mike Chen. Unfortunately, as is so often the way with Cydia based packages, as time progressed, work on the popular tweak came to a halt leaving users with no real alternative. The iTransmission project has been resurrected by a developer known as iOSHomebrew who has released the iTransmission 2 tweak in Cydia that he describes as a continuation of the original project. The tweak itself is pretty identical to the original offering, although it has undergone significant updates and changes to make it fully compatible with the latest iOS versions, all the way up to Apple’s latest iOS 5.x releases.

After installation, iTransmission 2 comes with a decent set of configurable options offering a lot of the functionality that you would see from a desktop client of a similar nature. The ability to toggle a web interface on or off as well as being able to set the app up to download over Wi-Fi network, cellular data connection or both if required, which is obviously a feature to save high data costs. Users have the option to add downloads through a number of different methods meaning the tweak is extremely versatile and comes all packed into a very native, but attractive and simple to use user interface. 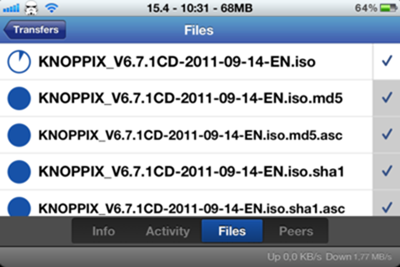 The iTransmission 2 tweak is sure to prove extremely popular, simply due to the fact that nothing else of this quality really exists in Cydia. The tweak itself is available as a free of charge download from the ModMyi repository and is compatible with iOS 5.