Is Apple CEO Carrying iPhone 8 In His Pocket?

Unless Apple uses next month’s 2017 iPhone media event to announce some major curve ball that no-one was expecting then it’s pretty fair to say that we know everything that we need to know about iPhone 8.

With that said, it seems that it’s time to move on from real leak-based evidence to taking a keen interest in exactly what Tim Cook keeps in his trousers, with the keen-eyed enthusiast suggesting that Apple’s CEO was potentially packing an iPhone 8 in his pants during a recent trip to Cincinnati.

Apple’s current CEO Tim Cook has been making what he likely thought was an innocent visit to CTS in Cincinnati, a company which manufactures “best-in-class” testing equipment for Apple. After the visit was over, and the agenda ticked off, it was time for the standard marketing pose which would be used to upload to Cook’s social media, such as Twitter. Nothing unusual here, right? Well, if you take a close look, then you’ll see the phone-shaped item in Cook’s right trouser pocket. Could Cook be rocking an iPhone 8?

At first glance, it looks as though Apple’s CEO simply has a smartphone in his pocket. Nothing unusual about that. But when you take a closer look you immediately see that the mysterious device looks a little too tall to be one of the company’s iPhone 7 units, and not wide enough to be an iPhone 7 Plus. The dimensions of the outline simply look totally wrong to be any one of Apple’s current devices.

As always, the Internet is in an uproar about it, so unless Tim Cook is actually using a Galaxy S8/S8+ or LG G6, it would make logical sense to surmise that he is taking the iPhone 8 on a field trip and putting it through its paces. 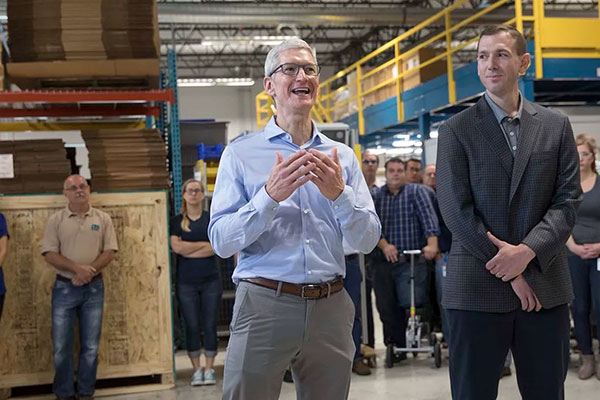 If it is actually an iPhone 8 test unit then it’s highly unlikely that Cook would have been pulling it out during his visit and actually taking calls and transferring money via the new iMessage Apple Pay functionality.

The romantic part of us would love nothing more than to believe that Tim Cook is walking around with an iPhone 8 on him 24/7, but the reality is that there is likely a much more innocent and simple explanation for what’s in his pocket. Care to explain, Tim?