Apple has been suffering worldwide with slowing iPhone sales to the point of missing its forecasts recently, but there is good news on the horizon.

That news comes in the form of new Kantar data that has the iPhone XR as the biggest selling smartphone in the UK during the first quarter of 2019, with iOS as an operating system growing its market share in the United States, too.

The iPhone XR was hoped to be a popular offering for budget conscious buyers, although it’s far from a cheap phone. However, it seems that people are indeed picking the colorful iPhone in lieu of the more costly options, particularly in the UK.

iPhone XR was a strong performer for Apple this quarter, outselling the combined iPhone XS and iPhone XS Max in Europe and claiming the title of the best-selling model in Great Britain. In Europe, iPhone XR and iPhone XS/Max models both play an important role in managing Apple’s base.

Perhaps most interesting is the news that the majority of iPhone XR buyers were upgrading from iPhones that were older the iPhone X, a device that arrived less than two years ago in 2017. That lends further credence to the belief that Apple’s most thrifty buyers are going for iPhone XR, while those who upgrade every time a new handset arrives are buying the best models available.

16% of XS and XS Max buyers upgraded from an iPhone X, compared to less than 1% of iPhone XR buyers. 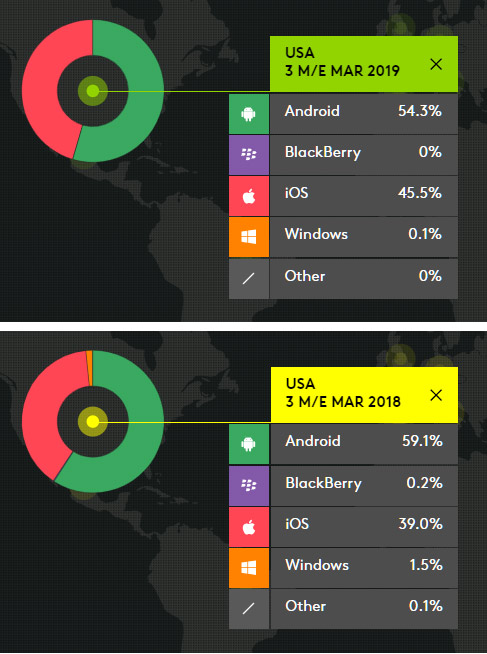 In the United States, iOS saw a large market share gain although that share actually declined in Europe.

iOS saw its share fall by two percentage points to 20.1% in Europe. However, the American market proved a brighter spot for Apple, as it boosted its US share in the quarter to 45.5%, an increase of 6.5 percentage points on the year.

Apple has been offering discounts, particularly on iPhone XR, to try and kickstart sales. Trade-ins have also been pushed as a way for buyers to save money on a new handset, again, particularly when it comes to iPhone XR.