Apple’s iPhone X, being the next step in the iconic product line’s evolution, comes with its own set of unique problems linked to the major design changes that it introduces, though it seems some things never change.

As has been the case with previous iPhone lineups, Apple has had to divide production between a couple manufacturers, likely to keep up with the phone’s staggering expected demand, and the result is two variants of the device that appear to differ in cellular performance. Apple continues to outsource the production of modems for its new iPhone to both Intel and Qualcomm, with speedtest crowdsourcing company Speedsmart discovering that Intel’s offering, though behind its Qualcomm counterpart in many other ways, is a “significantly” faster on certain networks.

Of note here is that these speedtest results were collected and compiled over 10 days with a 5:1 test gap between Qualcomm and Intel modems, and only cater for average download speeds, upload speeds, and latency. Simply put, any conclusions drawn from this data compilation are far from incontestable as well as being a partial representation of each modem’s overall efficiency.

The company behind the test, quoting a 10% difference in download and upload speeds on AT&T and a 15% difference on T-Mobile, both in favor of the Intel chip, advises users on said networks against opting for the Qualcomm variant.

We can say that when it comes to just purely speed that there is no reason if your [sic] on AT&T or T-Mobile to try to get a Qualcomm modem iPhone X. If anything the Intel modem version might be better for both those networks. 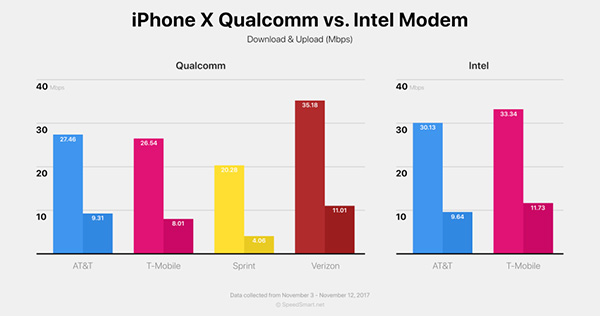 There has yet to be any official word from Apple on this, but the company is likely to discredit such findings even if it has legal battle going on with Qualcomm, and is expected to ditch Qualcomm altogether in the next-gen iPhone. Given the numbers, that might not completely allay any concerns the astute consumer might have developed, despite the Cupertino giant’s long standing reputation as an outfit that adheres to stringent quality assurance standards.