Things don’t seem to be getting any better for modem supplier Qualcomm. After having a lawsuit filed against it by the U.S. Federal Trade Commission on the gourds of unfair patent licensing practices, Apple is now going down the legal route by slapping a $1 billion case on Qualcomm, citing the belief that the business has been levying royalties against technology that it has absolutely nothing to do with.

The lawsuit filed by Apple comes just days after authorities in the United States put forward a similar suit accusing the chip company of employing tactics that were extremely monopolistic and anticompetitive in order to maintain a huge monopoly over key components that are used on a large scale in mobile devices.

The company is currently a major supplier of the chips which connect mobile devices to networks, with Apple and Samsung as clients. TThese two business account for a whopping 40% of the company’s $23.5 billion revenue.

This particular lawsuit has been filed in the United States District Court for the Southern District of California, with Apple essentially accusing Qualcomm of overcharging it for components. Additionally, Apple is also accusing Qualcomm of failing to pay back over $1 billion in promised payments, which it claims is due to its cooperation with South Korea’s regulators, the Korea Fair Trade Commission, as part of an ongoing investigation into Qualcomm. It seems that Qualcomm’s executive hierarchy isn’t happy about Apple being honest, open and upfront with the regulators:

If that were not enough, Qualcomm then attempted to extort Apple into changing its responses and providing false information to the KFTC in exchange for Qualcomm’s release of those payments to Apple. Apple refused.

Of course, as you would expect, Qualcomm has replied to those claims via its General Counsel, Don Rosenberg, calling Apple’s claims “baseless” in fact:

Apple has been actively encouraging regulatory attacks on Qualcomm’s business in various jurisdictions around the world, as reflected in the recent KFTC decision and FTC complaint, by misrepresenting facts and withholding information. We welcome the opportunity to have these meritless claims heard in court where we will be entitled to full discovery of Apple’s practices and a robust examination of the merits.

The full statement from Apple can be seen in the image below: 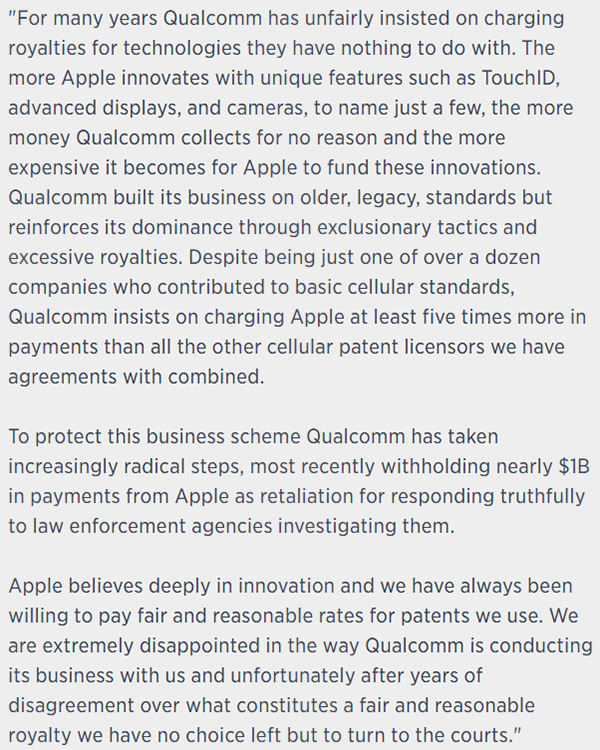 As always, we will bring you more on this one as it develops.