It’s always intensely heart-breaking to see an innocent, and very expensive iPhone go up in flames and end up utterly destroyed. It’s even more alarming when that spontaneous destruction of the device happens in mid-air on a flight that’s full of passengers who are entirely unaware of what is about to happen. As scary as it may sound, that’s exactly what has happened to a girl taking a spring break flight from Washington State to Hawaii.

A new report is suggesting that the iPhone 6 in question managed to spontaneously combust without any warning whatsoever during the flight. If the scene on the airplane was exactly as the girl in question describes, then we can imagine that it would have been quite a horrendous ordeal for all involved. 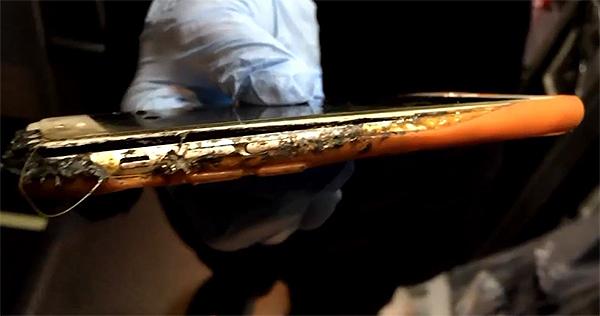 All of a sudden there was like 8-inch flames coming out of my phone, and I flipped it off onto the ground and it got under someone’s seat, and the flames were just getting higher and a bunch of people stood up.

We shouldn’t exactly be surprised that a lithium-ion battery has managed to cause carnage on an in-flight aircraft. Boeing, one of the world’s largest manufacturers of aircrafts, suffered a rather large series of issues a number of years ago when its range of 787 Dreamliners were grounded due to battery fires. That rather large and extremely public incident caused the Federal Aviation Authority (FAA) to ban all lithium-ion batteries from being carried onto an airplane on hold luggage. Of course, that doesn’t stop passengers from having these types of devices and batteries in hand luggage.

Lithium-ion batteries have also proved time and time again to occasionally explode when placed under particularly intense usage loads. Rather than generate electricity to power the device in question, the batteries have been known to generate large amounts of heat that then cause the unexpected, and highly dangerous, explosion of the battery. It’s currently unknown if the iPhone in question in this instance was being used to perform any heavy loads, or if it was on standby and not being used at all.

It’s definitely a terrifying incident for all involved at that altitude, but it’s highly unlikely that the FAA or airlines will take the move to ban all portable devices carrying lithium-ion batteries from being allowed onboard. With that said, it’s definitely a sharp wake-up call that we are all carrying on small bundles of intense energy with us wherever we go.