It doesn’t take a genius to work out that the iPhone 5 has been received with great enthusiasm from consumers. Apple is already struggling to stock out their inventories in order to fulfill backlogged orders and a large number of official Retail Stores still don’t have any to offer to consumers three weeks down the line. The iPhone 5 is also directly competing with Samsung’s popular Galaxy S III smartphone, and according to numbers compiled by Chitika, it looks like Apple’s sixth-generation smartphone is striding ahead.

The company have released figures that show the Apple iPhone 5 is being used to generate more traffic across its network than that of Samsung’s current flagship Galaxy S III smartphone. It’s actually quite a surprising statistic when you consider that the iPhone 5 has only been officially available for three weeks (18 days to be exact) and the Samsung handset has been available to the public for well over three months. The actual figures show that the iPhone 5 is also producing more traffic by a fairly decent margin. 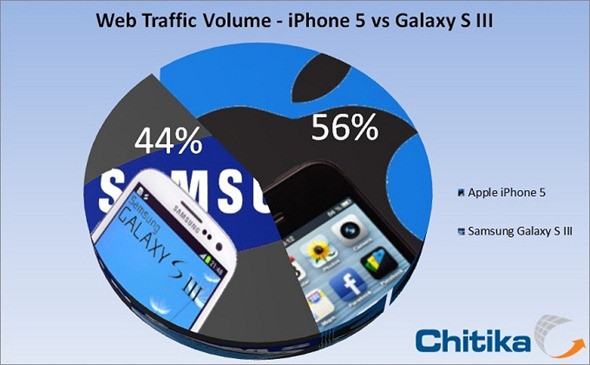 The test was undertaken using user agent analysis on a huge sample of mobile ad impressions that happened across a seven day period. Although it can’t truly be a scientific test and only accounts for those device owners who have browsed sites that contain the said network’s code, the company is putting it down to the inclusion of LTE on the iPhone 5 and the fact that new owners are encourage to try out the technology and browse the web more than they usually would to test out download speeds.

Samsung may be sitting on the top as the worlds current largest smartphone vendor but it won’t exactly come as welcome news to them to learn that Apple’s iPhone 5 is leading the way in terms of mobile data usage.