Back last week, we heard how an iPad survived a strange sequence of events which saw it fly from a car roof and embed itself into the bonnet of the vehicle behind. Although it did in fact sustain a great amount of damage, it still worked well enough for the device’s owner to be sourced from information found on the device, and if nothing else, was a great advert for the market-leading tablet’s durability credentials. Today, a video circulating around the blogosphere once again appears to reiterate what a tough cookie the Cupertino slate is, having survived a foul softball hit with apparently no damage whatsoever.

In the clip, a guy is seen happily capturing shots of the action at a softball game, but when a foul hit ricochets off the bat and straight towards his iPad, the sheer force sees it pushed out of his hands and dropped to the floor. Remarkably thought, the tablet seems to resume action as quickly as the game does, and the owner is seen once again happily taking snaps on his iPad shortly after. 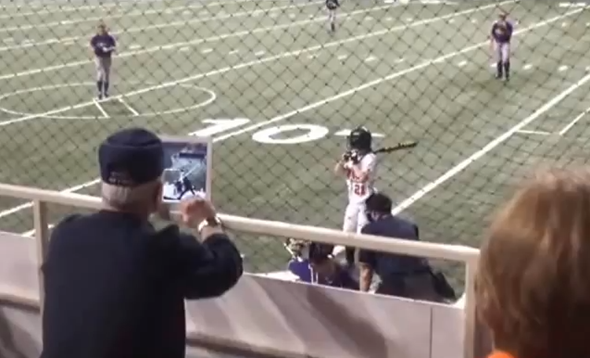 What’s perhaps even more of an eyebrow raiser than the fact that it worked again without much of an issue, is that the guy just seems to continue filming in such a nonchalant fashion – as if hundreds of dollars worth of equipment didn’t just hit the deck after being pummeled by a softball. If it was me, and that was my iPad, I’d have probably spent around a week lamenting any scrapes and scratches, and that’s before I would even consider entertaining the prospect of taking it out in public again.

Still, from what we can conceive, this iPad emerged pretty much unscathed, and despite the speed in which that softball appeared to be flying, the device stood firm.

In many of these cases, the manner in which mobile device lands when it hits the floor is the most significant factor as to how much damage is done. While both the car and softball incidents paint the iPad in a favorable light, it can take only one awkward landing on the corner of the unit to completely write the device off.

So before you go thinking your iPad is invincible, please do invest in a suitable protective shell, because if yours gets hit by a car or a softball, it mightn’t be so lucky.