You may remember the name Alvaro Pabesio from his ‘macOS 11’ concept and now he is back again, this time with an iPad Pro concept that takes what we know has proven popular from the iPhone X and then pushes it into the iPad realm.

That means Face ID, rounded corners and more all in a form factor that is very much all iPad. This is most certainly not the first concept for an updated iPad Pro that we have seen, but it’s probably the best looking.

The first thing that you will notice from the renders provided by Pabesio is the lack of bezels throughout the front of the device. With a device that has the same overall footprint as the current 10.5-inch iPad Pro, this concept allows for an 11.9-inch screen thanks to those smaller bezels and of course the removal of the Home button.

Notably, there’s no notch in sight either, which would be made possible thanks to a second generation TrueDepth camera system that would also be capable of recognizing up to four faces in either portrait or landscape orientation. This alone is something that would likely be required for an iPad given the way it will often be used in both orientations.

Other things that you will notice when looking through the renders include dual 12-megapixel cameras around the back, bringing Portrait mode to the iPad, and multitasking gestures that would allow for floating iPhone apps via Continuity. This could be a brilliant feature for using things like a calculator when doing homework, for example. The whole concept looks great and if this is anything like what Apple brings to market, we’re going to be very happy indeed. 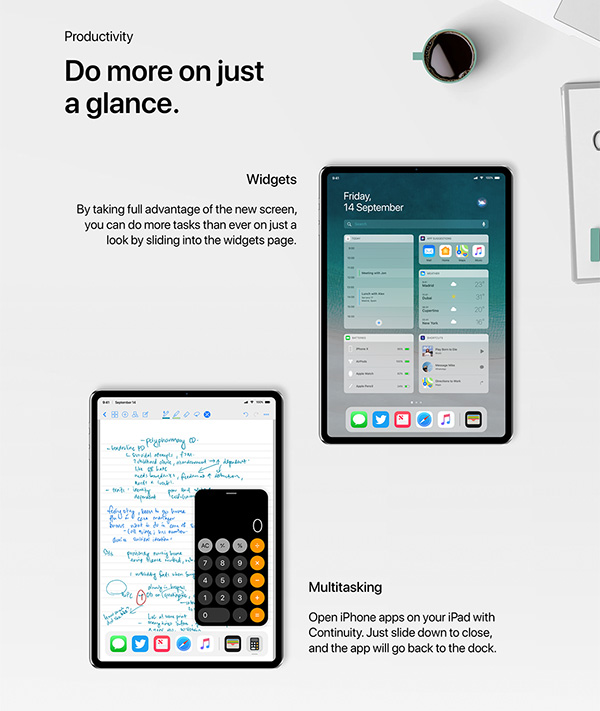 Apple is expected to announce new iPads this year, although whether they can look like this remains to be seen.