The new Apple iPad mini is set to hit shelves this coming Friday and with the majority of pre-order models already sold out, it looks like the company has another early commercial success on their hands. Although consumers seem to have reacted positively to the new mid-range tablet, it shouldn’t come as a surprise that the likes of Amazon have acted quickly in attempting to convince customers that they would be much better off buying the new Kindle Fire.

As part of their "much more for much less" campaign, the company is suggesting that the new iPad mini lags behind the Kindle with a mono speaker system rather than a stereo speaker setup – something that Phil Schiller reportedly refutes.

The official iPad mini product page on the Apple website shows the new 7.9-inch tablet as having only a "built-in speaker", a listing that has caused some people, including Amazon, to poke fun at the device. Apple executives obviously won’t want to get into the habit of personally responding to email correspondence from potential hardware owners, but if reports are to be believed then it looks like Apple’s head of worldwide marketing has taken time out of his busy schedule to fire back a one line reply confirming that the new iPad mini actually comes with a stereo speaker system.

The inclusion of stereo speakers has already been confirmed by early reviews of the product, so it seems a little strange that Apple hasn’t taken the opportunity to update the official product listing on their website with the information. Now that Phil Schiller himself has taken the time to fill us in with the official speaker based specification, we can only image that Amazon will act swiftly in updating the advertisement for the Kindle Fire HD on their site that states the mini iPad contains a mono speaker. 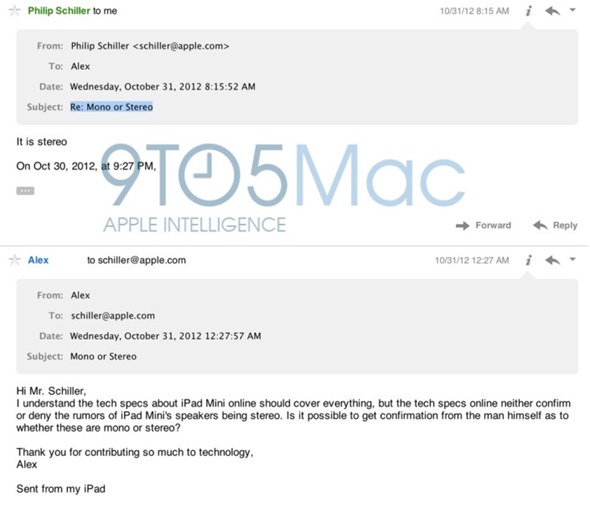 When the device actually starts landing on doormats this Friday, owners will be able to notice the difference in sound quality with the iPad mini being the first iPad to actually contain a stereo audio setup. It does seem a little strange that Apple has chosen to go with the standard mono setup on the full-sized fourth-generation iPad, but at least we now have confirmation that the iPad mini matches the Kindle Fire HD in at least one area.