The iPad 4 took everybody by surprise when Apple announced it towards the end of last month, but perhaps less surprisingly, when teared-down to the bare bones, there’s not a lot of difference between it and its predecessor – the iPad 3.

Having arrived in March, we were in awe of its beautiful Retina display, and although it was a little chunkier and heaver than we’d perhaps of liked (it was noticeably thicker than the iPad 2, for example), the A5X with quad-core graphics more than made up for it.

Resident iDevice tinkerers iFixit have placed the new slab under the proverbial screwdriver, placing it in separate pieces across the table. It offers an insight most of us would never be able to view, and while the iPad 4 is quite a bit advanced compared to the March release in terms of specification, it looks as though Apple has not made the most of opportunities it had to improve the device even further. 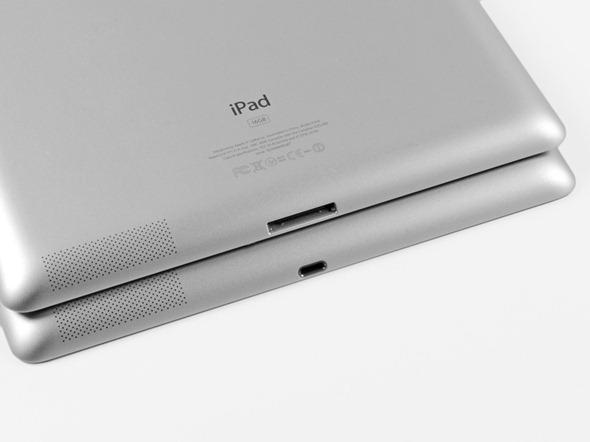 The Lightning connector, which first made an appearance with the iPhone 5 back in September, is Apple’s newest (disappointingly proprietary) connection method. While it was generally accepted the smaller, reversible connector was drafted in to free up space within, Apple has failed to really capitalize on that with the iPad 4. 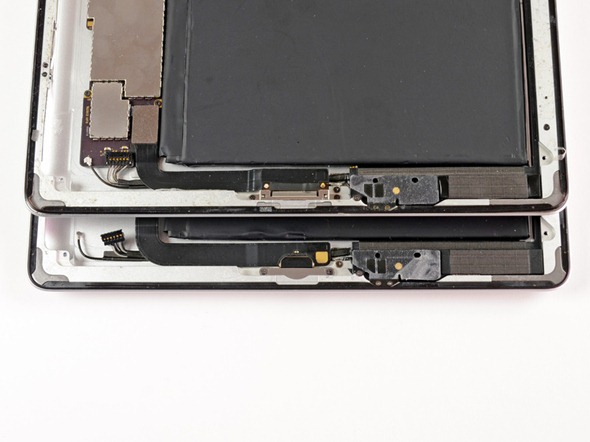 The new iPhone is noticeably thinner and lighter, and much like the MacBook Pro with Retina display, Apple has made every cubic nanometer count in delivering a top-tier product. With the iPad though, the space saved from omitting the 30-pin dock is simply that – space – and with much less of today’s peripherals yet compatible with the Lightning dock, I’d even go as far as to say consumers would have been better off with the older, chunkier design.

Even if Apple didn’t feel like innovating, it could have stuck some larger, more powerful speakers in that space to enhance general sound. Such a move would also have benefitted those with third-party speaker docks they now cannot use without an adapter which, of course, has to be paid for.

There’s said to be quite a mess of adhesive keeping things in place, and the battery is prone to piercing for those who decide to open up their iPads. But it’s fair to say that said problems will not affect day-to-day users, and given how it’s still the most popular tablet on the market, I don’t think those with the intention of buying the iPad 4 will be too deterred by the findings of iFixit.