If running Android on a tablet doesn’t fill you with excitement, what about the prospect of installing Chromium OS on that same tablet, adding a distinctly desktop-like flavor to proceedings? Sounds good, right? Right!

Google and Asus’ Nexus 7 Android tablet is arguably one of the most popular non-iPad tablets on the market today. Selling around a million units last month, and seeing a refresh by Google just a few short days ago, the Nexus 7 is certainly in the spotlight at the moment.

With that in mind, it is perhaps no great surprise to anyone that the little tablet is finding itself at the forefront of efforts to make Chromium OS run on an Android-powered tablet. 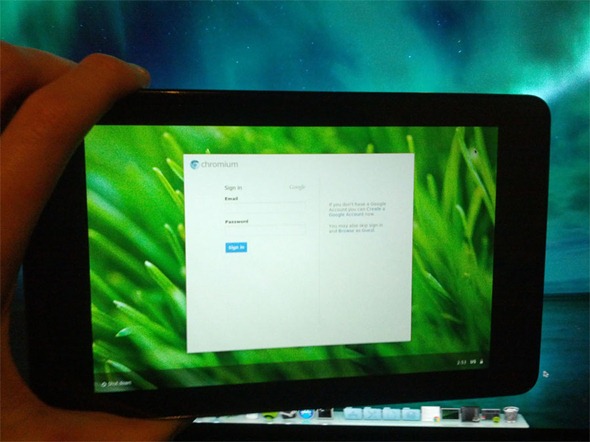 Developer Hexxeh, the man behind numerous Chromium OS builds right from minute one, has released a video showing off one of his new builds running on the aforementioned Nexus 7 tablets. He says it’s not quite ready for primetime just yet, but as soon as it is we’re told he will make it available to anyone who wants to join in on the fun. We can’t wait!

Back when Android was taking its first tentative steps onto tablets, many had hoped that Google’s then-new Chromium OS would form the basis of the operating system. Instead, users were given much the same Android experience that they had been used to on the smartphone. Even now, things haven’t improved all that much, and Chromium would still arguably be the better option. If you agree, then this news will no doubt be exciting to you. Otherwise, we’re surprised you’ve got this far into this post!

There is no timescale for when Hexxeh expects to have Chromium OS for the Nexus 7 ready for public consumption. We’d rather he make sure it’s really ready for release rather than pushing something out that just isn’t all there. That said, we’re as impatient as you guys no doubt are!

We’ll keep our eyes peeled and our ears to the ground for more news from Hexxeh and the Chromium OS community, and hopefully it won’t be too long before we can banish Android from our Nexus 7s in favor of something a whole lot more Chrome-y!