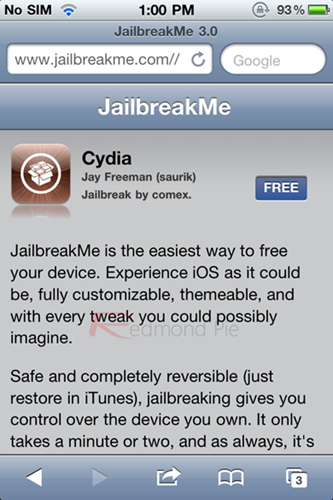 The saga of JailbreakMe has been quite a dramatic one. The tool was teased a few weeks back and it was actually leaked which caused a big uproar in the jailbreaking community. The very next day, we heard news of JailbreakMe.com being sold (which turned out to be fake). However, this story has a very happy ending as Comex released his tool two days ago on 6th July.

The tool, which works by making use of a PDF-exploit in Mobile Safari, jailbreaks all iOS devices running iOS 4.3.3 except for the original iPhone and the iPhone 3G since they aren’t supported. It’s astonishingly simple to jailbreak with JailbreakMe as it simply involves pointing Safari to JailbreakMe.com and clicking on Install.

It has been confirmed that Apple will be releasing iOS 4.3.4 in the very near future. It will be plugging the hole which Comex’s tool uses; avid jailbreakers are suggested to stay far, far away from the update.

Because of JailbreakMe’s extraordinarily simple procedure, it is no surprise that people have started jailbreaking iOS devices at their local Apple Stores.

A video uploaded on YouTube by user MrAJsTech shows a person navigating an iPod touch 4G to JailbreakMe.com and, well, jailbreaking said iPod in one of the newer Apple Stores.

Here’s the video itself:

It would’ve been quite hilarious if MrAJsTech had installed DreamBoard on it with the HTC Sense-like Endroid theme. But alas! It was not meant to be so.

A 9to5Mac reader also jailbroke a Smart Sign iPad 2, which you can see this video below:

Another RedmondPie reader sent this video in to show a display iPad 2 getting JailbreakMe 3.0 treatment at an Apple Store.

If you haven’t jailbroken your iOS device yet, you really have no good reason not to. The process cannot get any simpler than this. Jailbreaking your iOS device sets it free from the shackles of Apple, allowing you to install a wide variety of tweaks and apps that supercharge your iOS device.

If you’re on iOS 4.3.3 and are in possession of an iPod touch 3G/4G, iPad 1/2 or iPhone 3GS/4, you may follow the guide we wrote to jailbreak using JailbreakMe.

As of writing, more than 1 million iOS devices have been jailbroken with JailbreakMe.