Despite Apple maintaining a closed-source stance with its iOS mobile software, jailbreaks from the various dev-teams have allowed an abundance of useful, unregulated apps to be installed onto our beloved iDevices. 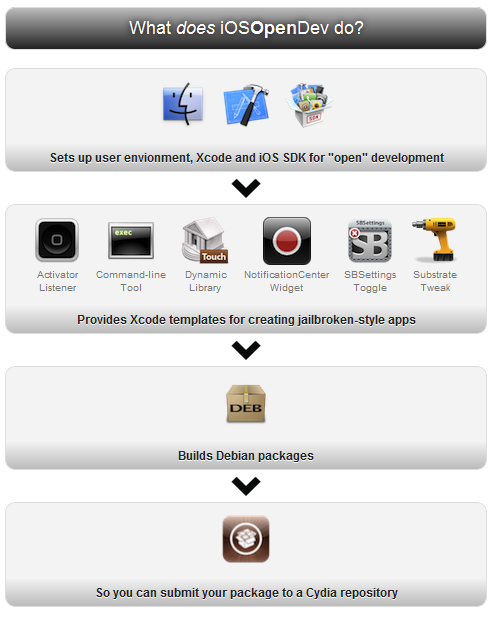 Whilst the process of creating App Store and Cydia apps invariably fairly similar, there is much less structure and organization in the latter approach. Furthermore, many of those with a little Xcode knowledge and ideas for tweaks are left to fend for themselves when it comes to making those ideas a reality.

With the jailbreak community currently thriving in light of the recent untethered releases from the so-called Dream Team of experienced iOS exploiters, a new utility called iOSOpenDev aims to help those interested in bringing their tweak ideas to the Cydia Store in the most simplest way possible yet. It promotes open development, cited by many app creators as the main reason for selecting Android over iOS – allied to the fact that submitting apps to the App Store can sometimes prove to be just as much hassle as piecing the app together in the first place, which leaves a bad taste at times.

iOSOpenDev is essentially a ‘template for tweaksters’, making the development of tweaks a much more streamlined and uniform process whether they’re based on Activator, MobileSubstrate, Notification Center or command-line, and we should definitely celebrate it as a step in the right direction.

It builds debian packages (.deb files), and provides all the necessary facilities in order for you to submit your tweak into a Cydia repository, which will predominantly be the BigBoss or ModMyi repos.

Developing for the jailbreak community is seen by many as more productive than developing for the App Store. It’s cheaper (Developer program is 99 bucks per year), and the Cupertino-based company is well known for readily barring apparently harmless apps for breach of its strict T&C’s.

iOSOpenDev is currently at teaser stage, but you can follow its progress on Twitter @iOSOpenDev. In the meantime, dream up a tweak or two which you think could benefit iPhone, iPad and iPod touch users worldwide. Who knows, maybe your app could feature one day here at Redmond Pie!

Here’s a video of a template for building SBSettings Toggle:

Thanks anonymous for the hat tip!