The iOS vs. Android supremacy debate is almost as old as both the platforms’ own age, and it never ceases to be. In some areas, Android takes the top spot, while others see Apple’s offering outshine its Mountain View competitor. One area, however, where iOS has always maintained the upper hand, is fragmentation – the word that causes Android fans to hide faces and come up with other allegations against the fruity OS.

In easiest terms, fragmentation can be explained as the differences in hardware and software that Android is split in, whereby a huge variety of Android devices on the market is running outdated software, or are not even close to the latest version available from Google. How it impacts users is by creating a dilemma for app developers, since certain versions of Android are unable to run a particular app, hence rendering it useless for those that are running such software. The hardware limitations and differences only add to the problem, reducing the app’s user base even further. 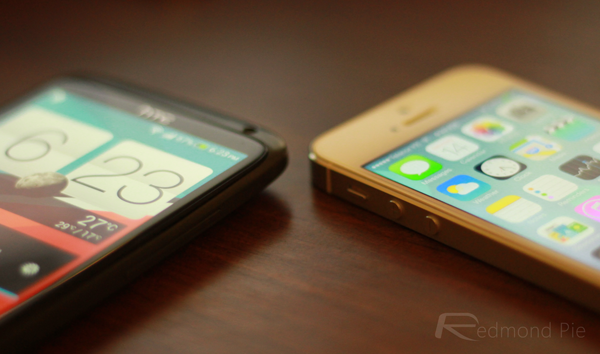 A new graphic coming from Fortune illustrates the problem even more clearly, showing the percentage of users for different versions of Android out of total user population. As you can see, there is no version of Android that has a small user base, all the way from Éclair to Jelly Bean (KitKat isn’t included in the comparison).

From the graphic, it’s the trend that emerges which speaks volumes of trouble for Android. Even today, the largest percent of Android users are running Gingerbread (v 2.3), followed by not Jelly Bean or even Ice Cream Sandwich, but rather, Froyo (an even more outdated version). Jelly Bean follows in third place, and KitKat has the smallest user base until November. The trend also indicates that the user base for outdated versions is still continuing to grow. 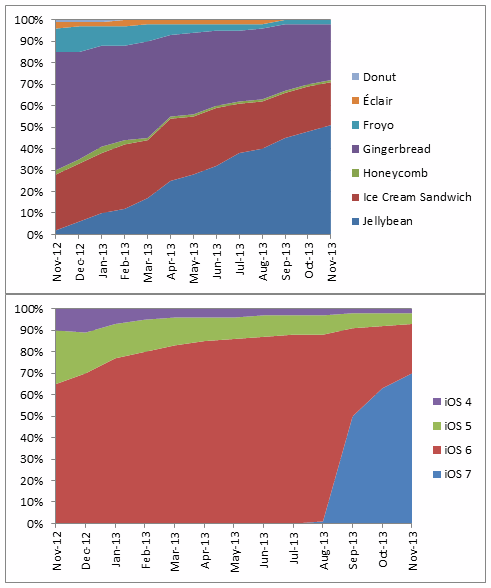 In comparison, a similar chart for Apple has very clear distinctions, where iOS 6 users are just 22%, while a whopping majority of 74% are running iOS 7 on their devices, making up for 96% of Apple’s total mobile and tablet user base. What this means is faster updates, better quality apps, and uniformity for developers in knowing that whatever they develop will reach the maxima of user population.

Apple has openly criticized its primary competitor for fragmentation, and for good reason. The Cupertino company has only seven devices officially being sold in the market, making it much easier to maintain update integrity, unlike hundreds of variants of Android available. With KitKat’s ability to run on lower end devices, Google might be looking at changing that, but we don’t see that happening any time soon. Time will tell if they manage to beat it or not.