Whether you love or loathe Google’s Android mobile operating system, its meteoric rise to become the most widely-used of the big ecosystems in just a couple of years is something which must be applauded.

Having said that, when something grows at such an impressive rate, problems can quickly arise, and when moving at an unprecedented pace, amending those shortcomings isn’t always particularly simple, as the search giant has discovered on numerous occasions.

With so many OEMs offering different types and standards of devices, Android isn’t tied together like a family, but rather fragmented, with a vast range of devices offering different versions of the Big G’s mobile OS. To some, this isn’t a cause for concern – there is plenty of choice for the consumer, while the reach from Google’s point of view speaks for itself. However there has been a fair amount of opposition to fragmentation by mobile OS aficionados – many of whom see it as an issue which will eventually lead to demise of Android.

Visual depictions of Android fragmentation have cropped up on occasions in the past, with developer Michael DeGusta having created an illustration of what he described as "Android’s fragmented update history" last October. At the time, he talked about how the iPhone had essentially turned each and every smartphone into a “blank slate,” and how the value of a device is largely attributable to how smoothly a smartphone can run software. He added:

When you’re making a 2 year commitment to a device, it’d be nice to have some way to tell if the software was going to be remotely current in a year or, heck, even a month.

In addition to DeGusta’s findings, designer Chris Sauve reckoned 2012 to be “the year of Gingerbread”, which rings true given that, by Google’s own admission, two-thirds of Android users are still running on 2010’s software.

To add to the increasingly heated debate, OpenSignalMaps has dropped its own two cents into the pot. Having collated data from 681,900 downloading its software over the past six months, the company found an incredible 3,997 distinct Android devices running its app, although it’s worth noting that each custom ROM resembled a unique device in the eyes of the research. 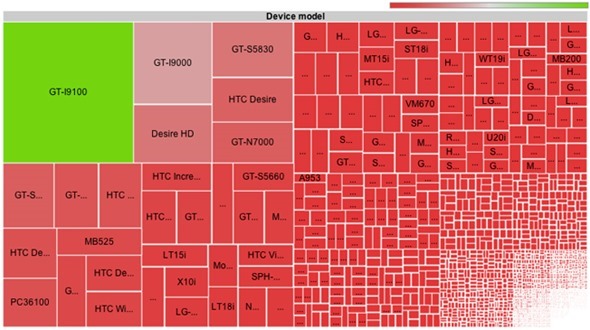 The report unearthed a colossal number of different display resolutions; fragmentation which OpenSignalMaps believes will only worsen as time progresses. That said, the company concluded that the benefits of creating Android apps still greatly outweigh the issues, since there are so many cheaper devices affordable to essentially anybody.

Is it a problem? Or is it another case of Much Ado About Nothing?