The holy war between people who use Android and those who use iOS is one that really should have gone away by now, but all you have to do is browse any public smartphone forum to realize people really do still get their knickers in a twist about which platform they believe is the best.

To prove the point that both Android and iOS have their positives and negatives we thought that we would put together a list of twelve – 12 – things that make iOS better than Android and in the interest of fairness, we’ve done the same to show why Android is better than iOS. 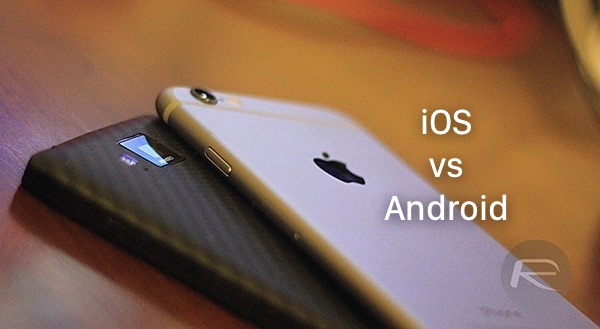 We’re sure plenty of people will disagree with a few of these but that’s what makes the internet so great.

So, let’s get started.

Without the need to get updates OK’d by hardware makers who then slap their own cruft over the tap, Apple just pushes an update and watches as millions upon millions of people install it as soon as it is released for all supported devices. No waiting.

That’s always going to be debatable, but the overall quality of iOS apps – compared to their Android counterparts – has always remained superior in terms of fluidity, performance and overall polish.

This one’s a winner when compared to Android; Apple keeps on supporting its older hardware for an extended period of time, keeping things fresh for those who can’t afford to upgrade to the latest and greatest.

Developers tend to go for iOS first before pushing their apps out on Android – in short: iOS gets the best apps first, followed by Android.

When you look at iOS you have to take into account iTunes, the App Store, the iTunes Store and all of the other parts of Apple’s ecosystem like OS X, Apple TV, Watch OS, iCloud etc that amount to more than the sum of their parts.

Apple’s iOS may be getting less user friendly with every update, but when compared to Android it’s a piece of cake to use, even for novices.

Paying for things with your iPhone, or even your Apple Watch, never gets old. Apple Pay is fast becoming the most popular and the most used mobile payment option out there.

With over 400 Apple Stores around the world, the Cupertino giant provides customer support for iOS devices like no other. Have a broken device and need a replacement? No problem. Want to set up email on your new device? Consider it done. And AppleCare is second to none. End of conversation.

Being able to have everyone in one family use the same credit card and effectively share a bucket of apps is great, especially when you throw in the parental controls that come with it.

Yeah, iOS has had its moments but you don’t see anywhere near the number of security scares on iOS that you do on Android.

You can start a task on one device and pick up where you left off on another. And oh, you can even make or receive phone calls from your iPad or Mac too. What’s up, Android?

A messaging platform unlike any other, iMessage is by far the most seamless IM/SMS experience out there. Period.

Well, to a point at least. It’s certainly more open than iOS, that’s for sure, leaving it more accessible for changes by its users.

One of Android’s biggest strengths is the lengths that people can go to when customizing how it works, and how it looks. Users have the option to use custom skins and themes to the nth degree.

Want Android on a high-end smartphone? No problem. A low-end phone that costs next to nothing? You got it.

Access to your files like a grown up. That should not be undersold and Android wins here over iOS by a huge margin.

If you’ve ever tried to manage how a child uses your iPad or iPhone, then you’ll know why user accounts are so important.

You’ll never run out of space to keep your videos on. Well, almost never. Most Android manufacturers support this feature.

Running low on juice on that business trip? No problem, just swap out the battery. Just like expandable storage, this feature is supported by most Android device manufacturers.

Because who doesn’t want to change the channel on their TV using their smartphone? Exactly.

You can spend hours fiddling with Android, flashing ROM after ROM. Just be careful because once you pop, you just can’t stop.

Perfect for squeezing that little bit of extra performance out of that already-powerful CPU.

This one’s our personal favorite; you can download any file right from the Web browser on Android – be that a song, a video or a plain old document.

A feature supported by most Android devices these days, you can get hours of battery life by just charging your gadget for a few minutes.

There are plenty more reasons on both sides of the fence, but these are a good start as far as we’re concerned. We’re big fans of both Android and iOS though, so let’s all be adults and just get along. OK?