The iOS jailbreak game is an ongoing cat-and-mouse battle between the developers who spend their time seeking holes in the iOS software to exploit, and Apple, the company behind said software. The jailbreak community, or specifically, the Evad3rs team, really threw down the gauntlet to the Cupertino company with the release of Evasi0n7, a universal untethered jailbreak utility for all devices running the latest software, but having already taken steps to plug some of the kernel exploits with iOS 7.1 beta 4, the fifth beta shows even more signs that Apple is taking steps to foil the efforts of the jailbreakers.

The initial iOS 7.1 beta, along with the following two, passed without incident, but it was always somewhat inevitable that the patching process would eventually begin. And so it happened last week when, as recognized hacker iH8sn0w confirmed on Twitter, iOS 7.1 beta 4 was found to be partially patched. Now, as described once again by iH8sn0w on Twitter, iOS 7.1 beta 5 takes things even further, also patching the AFC sandbox escape and chown vulnerability..

In layman’s terms, if a jailbreak was made possible only when a certain number of different doors were all opened at the same time, Apple seems to be slamming one shut with each new beta update, and by the time we reach the GM release, it’s likely that all of the doors will be locked.

While iH8sn0w is keeping folks in the loop, the Evad3rs team is remaining mum, but with good reason. By sounding off about exploits they may or may not have, or by simply speculating in any way, the chances of any future jailbreak being achieved could be severely hindered. Hence why, as MuscleNerd pointed out a few weeks back, the jailbreak scene rarely passes comment on beta releases. 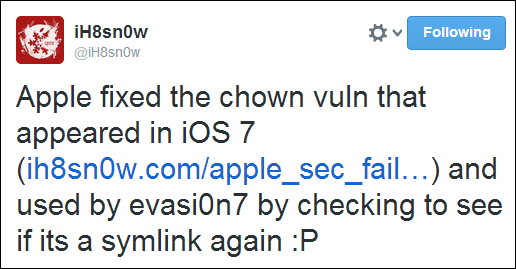 So, while iOS 7.1 certainly won’t be jailbreakable using Evasi0n as is, we can still hold out a fair amount of hope that, in being reserved, the Evad3rs team perhaps has an exploit or two up its sleeve ready to attack iOS 7.1 GM once it has been readied for prime time. Fingers crossed on this one!

With the fifth beta arriving today, it shouldn’t be too long before we get an end user release. We’ll have all of the details, as well as the jailbreak status of iOS 7.1, as soon as said information becomes available, so stay tuned!