It’s fair to say that a lot of the iOS based discussion on social media sites at the moment is centered around iOS 7 beta 3, and more specifically the differences between this latest version and the original beta launched immediately after this year’s WWDC keynote. The sweeping changes between previous versions of iOS and this beta are there for all to see, but it’s extremely interesting to see Apple reflecting on developer feedback and making amendments as they go forward towards the final release. What’s more interesting though are the changes that some of us might not notice, including the move to utilize the Retina interface assets from iPhone apps in order to provide a better experience for non-Retina iPad users in ‘2x’ mode.

Anyone who has ever used an iPad will more than likely be familiar with the 2x mode. Running iPhone native apps on the iPad results in an option that allows the app to be scaled up to two times its standard size in order to fill up some of the additional screen real estate on the iPad. Unfortunately, one of the trade-offs is that the user has to accept some quality degradation as graphical assets are stretched beyond their intended size. The jailbreak community already had tweaks like FullForce to combat this issue, but it also seems that iOS 7 beta will leverage iPhone Retina assets to improve quality for iPad 2 and iPad mini users.

Considering we are now on the third-generation of iPhones with Retina displays, it seems rather strange that it has taken Apple this long to introduce this feature into the non-Retina iPad world. Rather than doubling the pixels of the non-Retina iPhone assets and causing them to look blurry on the iPad 2 and iPad mini, iOS 7 will utilize the Retina "@2x" assets that should be part of the apps bundle. Any visual assets that have been purposely designed for Retina capable iPhones should feel perfectly at home in a 960 x 640 window on the iPad without losing quality. 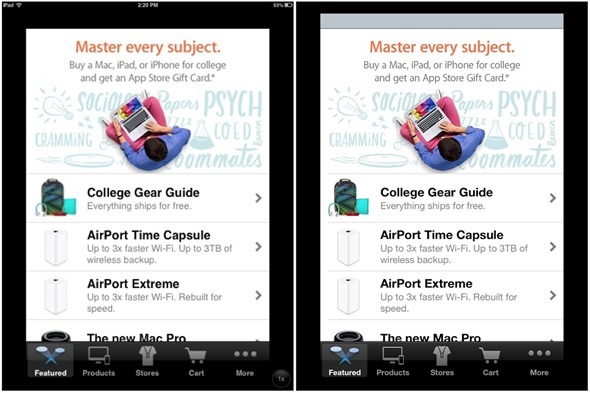 What’s even more interesting is that it looks like Apple could be planning on removing the ‘1x’ and ‘2x’ option altogether for non-Retina iPad users. When a native iPhone app is installed on an iPad running the latest beta of iOS 7, it automatically launches in the larger 2x mode, without the option to scale the app back down to the smaller iPhone sized window. While this small but notable change will directly benefit a whole host of iPad users, it is once again a clear indication that the Cupertino company is more than aware of what is going on in the jailbreak world. With all new app submissions and updates requiring Retina assets, it should definitely provide an enhanced experience.