iOS 6.1 VPN On Demand Feature Gimped Thanks To A Lawsuit

Those iPhone users who make use of a VPN connection will find that their phone gets a little less smart later this month after Apple announced that it is removing a feature from its VPN settings.

Announced via a knowledge base article on its website, Apple confirmed that as of later this month iOS 6.1 users will be unable to have their phones and tablets establish a VPN connection on demand, meaning they will instead have to manually enable the VPN as and when they need it.

Currently, iOS can be asked to establish a VPN only when a connection is not available via standard DNS routing. If that is the case, the operating system assumed that a VPN is required in order to connect to an external resource and that connection is then made. This, apparently, goes against a patent owned by VirnetX. Apple was ordered to pay that company $368 million towards the end of 2012, and this appears to be the latest fallout from that particular lawsuit.

Devices using iOS 6.1 and later with VPN On Demand configured to “Always” will behave as if they were configured with the “Establish if needed” option. The device will establish a VPN On Demand connection only if it is unable to resolve the DNS name of the host it is trying to reach. This change will be distributed in an update later this month.

Following the change, expected as part of an iOS update towards the end of the month as alluded to by Apple, users will have to manually enable their VPN connections as and when they need them. No great hardship we would agree, but certainly not as slick or seamless as the current solution. 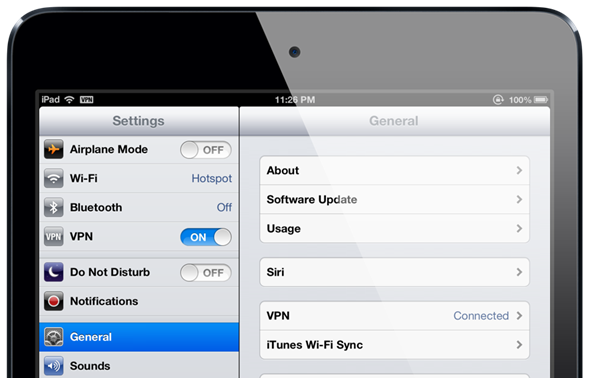 Many business users currently take advantage of VPN connections in order to be able to connect to their corporate network when on the move. With Apple trying to get iOS into the business world, and succeeding in the face of dwindling BlackBerry adoption, this move will smart more than it perhaps normally would.

With that in mind, it’s no surprise that Apple has said that it will offer an alternative to the current solution in due course, so we’ll have to wait and see what shape that solution takes later this year.