Apple has, in years gone by, held various ‘Tech Talk World Tours’ aimed at giving its developers a more in-depth view on new technologies. iOS 5, the company’s latest mobile operating system, will be the next taken on an education spree from Berlin to Beijing, Seoul to Seattle.

First stop will be Germany on November 2nd, with the tour running all the way through to the new year before completing on January 23rd. Note that the talks will NOT be for beginners, nor those looking to maybe learn how to code some time in the future. Apple has stated that, with the help of experts, those with experience with the iOS SDK will gain valuable knowledge on advanced coding and design techniques beneficial for the ongoing development of App Store apps.

The agenda for proceedings begins with an iOS 5 "Tech Talk Kickoff", whereby introductions will be made, brief overviews, presumably accompanied by the usual spontaneous pleasantries. After the scene has been set, the talk will then head towards the iPhone and iPad user interface design.

Either side of lunch will be reserved for talk of iCloud and how developers can make the most of it. The mere fact that the Cupertino-based company has chopped the talk into two parts gives even more emphasis for its longing for a decent web venture. After the failures of the past, and the reported unsuccessful attempt to acquire Dropbox in ’09, one suspects that in-depth iCloud education will be top priority.

After the break, there will be three different seminars operating simultaneously, covering a wide range of the key sectors for any iOS developer. These include Airplay, turn-based gaming with Game Center, and adopting in-app purchases – another area whereby both Apple and its developers are keen to increase the margins.

After a day of vacuuming in all that information, attendees will be given an appropriate respite, with wine and cheese being served at the end.

All-in-all, nine cities will be covered. In ascending order, they will be Berlin, London, Rome, Beijing, Seoul & Sao Paolo; with the final three seminars occurring in the Stateside cities of New York City, and finally the Austin Convention Center, Texas.

Each and every event will be free to attend, so if you’re an iOS dev keen to improve your app(s), check out the concise list of the dates and locations of your local Tech Talk Tour stop below! 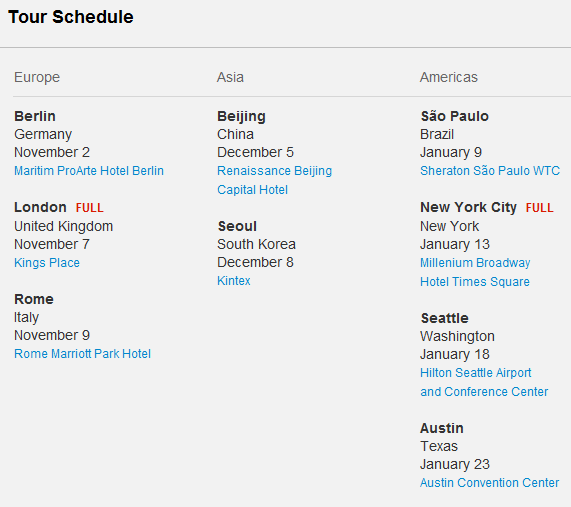