Gmail To Get A Complete Visual Overhaul [VIDEO]

With Google currently giving all of its web apps a long-needed overhaul, it was only a matter of time before the search giant finally got around to giving Gmail a lick of paint.

A leaked video, which Google somehow managed to publish to its YouTube channel by accident, shows off the changes Google plan on bringing to everyone’s favorite webmail service.

While Google did notice their mistake and subsequently pulled the video, Google Operating System managed to mirror it for our viewing pleasure.

The user interface changes may look familiar, and they should – Google released a ‘Preview’ theme all the way back in June, which it has to be said wasn’t that well received amongst those of us who gave it a try. Presumably Google believes that the user interface will work better once it’s hard coded into the web site, though we won’t know for sure until we get our hands on the final release.

Another change which will affect the way we work is the new conversation and reply view. Displaying large icons ala Facebook, the new layout promises a more readable interface, doing away with the somewhat cluttered and hard to follow layout we’ve become used to over the years.

Other visual changes include new, Android-like buttons and the whole interface now rejiggers itself as you alter the size of your browser’s window. It’s a fancy effect, and it helps for those with smaller screen resolutions as well as those with giant screens. 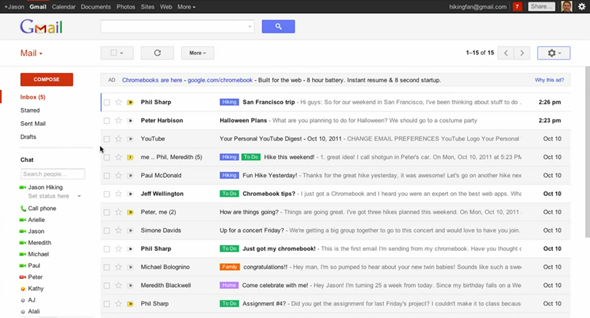 Those who like to use themes haven’t been forgotten either. Google has added some new ‘HD Themes’ which, it says, feature new high resolution backgrounds. The embedded video gives a glimpse of some of these new themes and some of them actually work quite well with the redesigned interface.

The leaked video does not say when the new Gmail will be made available to users, but with so many power users firmly entrenched into a workflow that revolves around Gmail as it is today, we’re sure more than a few people will be upset about the changes Google is set to make.

If you sign into Gmail and see the changes in affect, drop us a tip and we’ll take a look at how Google has updated its most loved product.