iOS 4.3 to Bring AirPlay Video Streaming to Safari and Third party Apps in 2011

AirPlay was introduced with iOS 4.2.x which allowed users to stream audio, video and photos via supported iOS devices so that you can watch them on your television sets (using Apple TV). This feature though came with its share of limitations, the primary being the lack of support for third-party apps, and audio-only streaming from Safari. 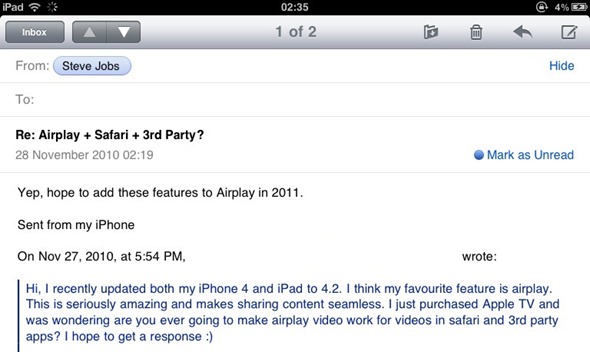 There are of course ways to enable AirPlay Video Streaming in all iOS Apps, but I bet most of the users would prefer getting a concrete solution. Maybe Apple can release an API that can be utilized by the third party app developers to enable streaming via their applications.

The problem was initially put down by many who thought that the issue could be related to bandwidth limitation. But a more concrete reason could be associated to Apple making haste with the incomplete version of AirPlay that doesn’t support third party apps. Again in my opinion this haste was made to ensure that the iOS 4.2 is released in November. The second most nagging issue that has been noted is that users are unable to stream content on their iPhone 4 via AirPlay that has been shot on their iPhone 4. The reason as mentioned above could be bandwidth related.

Whatever the reason was, Steve Jobs in his response to a mail clarified that AirPlay will have all these features added in 2011, possibly via the next iOS 4.3 software update.

Q: Hi, I recently updated both my iPhone 4 and iPad to 4.2. I think my favorite feature is airplay. This is seriously amazing and makes sharing content seamless. I just purchased Apple TV and was wondering are you ever going to make airplay video work for videos in safari and 3rd party apps? I hope to get a response. 🙂