It all seems to be full steam ahead in the world of jailbreaking. After a few days of activity, the news continues with @S0rryMybad sharing the proof-of-concept of the bug that was used to jailbreak pre-A12 devices on iOS 12.1.2.

The developer and security researcher had originally let the world know approximately two weeks ago that he had discovered an exploit for iOS 12.1.2 and below but only for devices which aren’t based on Apple’s A12 architecture.

Typically, those who find these bugs don’t want to publish any information them into the public domain until Apple has patched the bug with a firmware update. That day has been and passed and we are now starting to see more information coming through.

The tweet pushed out via Twitter suggests that more information is going to be forthcoming, which will include a blog post containing what is likely to be a detailed write-up on the bug and the proof-of-concept:

Here is the PoC of the bug I used to jailbreak before. It can work before 12.1.2.. The blog post about exploit on A12 will come soon.

Once that blog post is published, anyone who wants to know more about the exploit or the power that it holds will be able to learn more about it and what it is capable of. The blog post will also likely provide some additional context on how @S0rryMybad discovered the exploit and the areas of Apple’s platform that it actually covers. Additionally, it’s also worth noting that this particular bug which is being discussed can actually achieve tfp0, which is the ability to execute arbitrary code that is capable of not only reading from the kernel’s memory but also writing directly to it. 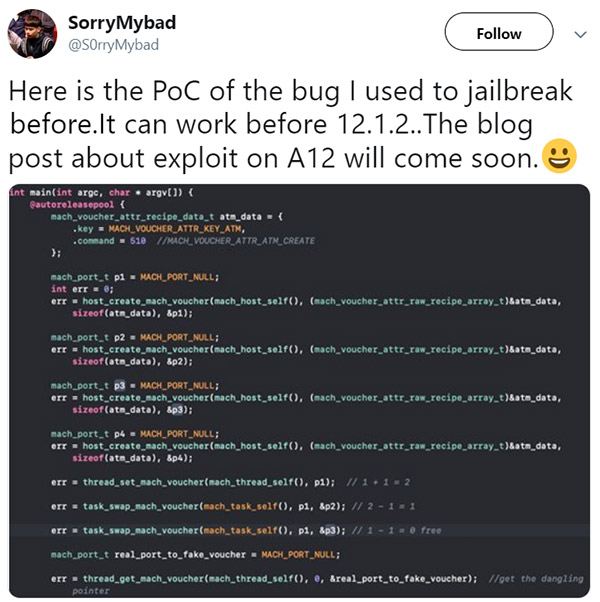 Basically, if you are going to put a jailbreak together, a tfp0-capable bug is an absolute requirement as part of the larger jigsaw puzzle. What we don’t currently know is if the exploit can be used to take an existing popular jailbreak offering like Electra or unc0ver and take it to the next level to offer iOS 12.1.2 and below support on pre-A12 devices. Or, if this will need to be used to make an entirely new jailbreak which could then go through a period of testing and be pushed out into the public domain.

As always, we will be sure to keep you updated as and when more information becomes available. In the meantime, while Apple is still signing iOS 12.1.1 and iOS 12.1.2, you may want to downgrade to lowest possible firmware from iOS 12.1.3 to take advantage of any upcoming iOS 12 jailbreak.