Apple has today released iOS 11.4 for HomePod speaker bringing in the much anticipated AirPlay 2 as well as stereo pairing functionality to its smart speaker. The company has also announced the availability of HomePod in three new markets next month.

Coming to availability in new markets, the attempted Apple audio revolution will continue its pursuit of global domination next month as Apple just announced that its Siri-powered HomePod device will be available in Canada, France, and Germany next month on June 18. Audiophiles and Apple fans in the United States, United Kingdom, and Australia have been able to join the wonderfully rich and powerful audio offered by HomePod since February 9th of this year.

Originally slated for release in December 2017 in time for the festive period, Apple was forced to push back the original launch plan and started taking pre-orders for the hardware in late January ahead of eventual shipping date in February. Now, after enjoying a decent amount of launch success, it seems that it’s time to expand availability into additional markets.

According to Apple’s official press release, the “breakthrough” wireless speaker “arrives in Canada, France and Germany Starting June 18” and will come equipped with an array of new capabilities thanks to the release of iOS 11.4. Once the hardware is available in the new territories, consumers will be able to enjoy what Apple is calling an even more “immersive listening experience” throughout the whole home, thanks to the ability to pair HomePods together to form a stereo experience taking advantage of AirPlay 2 capabilities for multi-room audio.

HomePod, the breakthrough wireless speaker from Apple, now delivers an even more immersive listening experience throughout the home with support for HomePod stereo pairs and a new multi-room audio system in iOS 11.4. This free software update introduces the most advanced, easy to use, wireless multi-room audio system using AirPlay 2 to play music in any room from any room, move music from one room to another or play the same song everywhere using an iOS device, HomePod, Apple TV or by asking Siri. 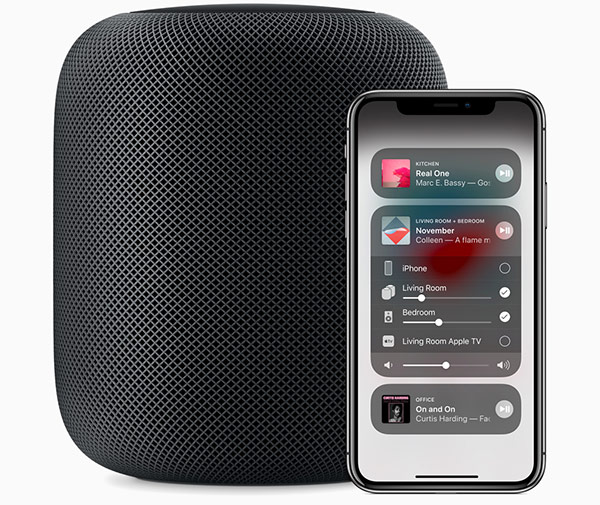 The hardware released into Canada, France, and Germany next month is the exact same first-generation hardware pushed out into the release countries earlier this year but comes with the added benefit of improved software capabilities thanks to iOS 11.4. No official pricing has been announced by Apple at present with the official press release simply stating the new features unearthed with iOS 11.4 as well as confirmation that the hardware will be available in the aforementioned countries starting June 18.

If you have HomePod already, you can update the firmware on it to 11.4 by following our guide here: How To Update Apple HomePod Software / Firmware To Latest Version.