After announcing that there will be a new jailbreak detection thwarting mechanism on the way soon, the folks behind the Electra jailbreak have been beavering away to get the building blocks in place to allow users to keep using apps that would normally not work on jailbroken devices.

Now we have new confirmation from one jailbreak developer that something is in the pipeline, and it’s called Libertas.

Announced via Twitter, Libertas apparently targets no fewer than nine different techniques that are used by apps in order to allow them to check whether an iPhone or iPad is jailbroken. Libertas has been tested on more than 90 apps, which should mean that it has a fairly decent chance of making your favorite app work, something that not all anti-jailbreak detection options are capable of.

For those unfamiliar with jailbreak detection, it’s a mechanism that allows apps to tell whether a device is jailbroken and then refuse to run if that is the case.

This is mostly used by financial apps like those that your bank may offer, but some games including Fortnite are also using jailbreak detection as a way of trying to prevent cheaters from taking over games. With something like Libertas in effect, this may no longer be viable. 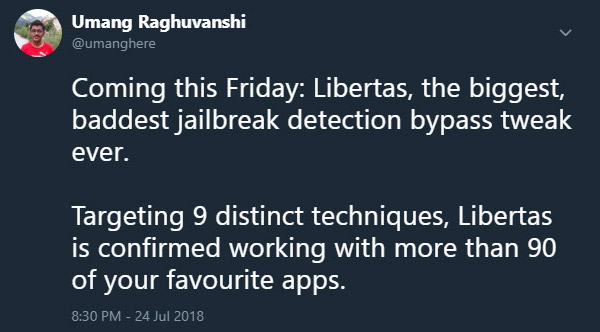 According to developer Umang Raghubanshi, Libertas will arrive this coming Friday, which means we will know more in a couple of days.

If you’ve been stuck unable to use a vital app or play a favorite game on your jailbroken iOS device, then this may just be the answer to your prayers.