A growing number of registered developers and public testers are starting to download Apple’s iOS 11.3 firmware, which is now in a pre-release state as the company looks to get it ready for a public release later this year. As that testing continues, “when will Apple release iOS 11.3 beta 3?” continues to be asked.

Apple made quite a big song and dance about iOS 11.3 when it was first announced. Even going as far as publishing a detailed article of the platform with high-resolution screenshots through its own Newsroom service. 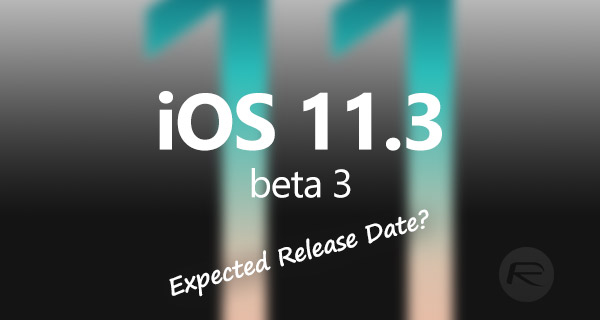 However, since that announcement, things have been slightly quiet from Apple’s side as it works to push out polished pre-release seeds of the platform all testers to take advantage of. Given Apple’s current release velocity, and taken into consideration previous release schedules and patterns, we expect Apple to push out the third pre-release seed of iOS 11.3 on Tuesday, February 13th.

If released as expected, Apple’s internal engineers will have had enough time to implement a number of new changes as well as some features which will be part of the iOS 11.3 final release but which are being drip-fed into the beta program. Of course, the third pre-release seed will also ship with a number of fixes and patches for issues which have been reported in the previous two betas as well as a list of known and ongoing issues which still exist in the firmware. Developers will be issued with the release first, with public testers getting in on the action approximately 24-hours later.

As far as iOS 11.3 is concerned, iPhone and iPad owners are definitely in for a treat when it launches in an official capacity. Apple has paid a lot of attention to the Messages app with recent major releases, and iOS 11.3 is no different. iOS 11.3 brings new Animoji characters to enhance the messaging experience as well as a new Business Chat feature which instantly puts consumers into communication with specific businesses through the app.

Apple is also bringing back Messages in iCloud which ensures that all messages are stored in the iCloud platform. iOS 11.3 owners can also expect third-party apps to get better thanks to improvements made in ARKit, HealthKit, and potentially even thanks to the arrival of ClassKit.

As soon as the third beta arrives we will be sure to let you know.