Apple has officially released iOS 10.3.2 beta 4 to the development community, which can mean only one thing; it’s time to find out if the Cupertino-based giant has made any noticeable improvements from a performance perspective.

In order to ascertain that, YouTube channel iAppleBytes has once again created a series of speed comparison videos, pitting multiple iPhone models running iOS 10.3.1 and iOS 10.3.2 beta 4 against one another. 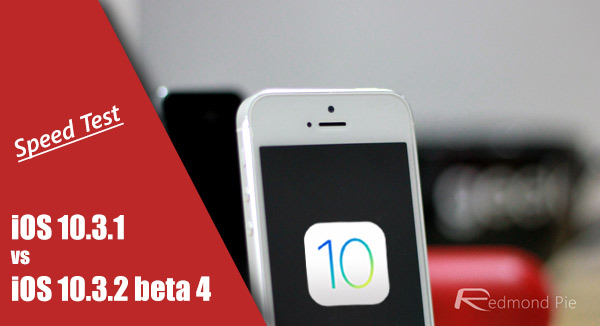 iOS 10.3.2 is not going to be more than a very minor update with a few internal improvements when it lands on devices publicly. That means it doesn’t contain any noticeable outward-facing changes or feature additions, and it also leaves devices owners hoping that those internal improvements manifest themselves with some performance increases. No matter how small.

As always, the videos focus on how quickly each device can boot up from cold, running each version of the firmware, as well as the performance achieved when invoking stock apps from the Home screen.

Particular attention is generally paid to the older devices when running these types of tests, as history has shown time-and-time again that newer versions of iOS can, on occasion, cause performance issues on devices like iPhone 5 or 5s. It’s immediately evident that the boot-up process is quicker on iOS 10.3.1 when running on iPhone 5 and iPhone 5s. Strangely, iPhone 6 and the iPhone 6s perform the boot process a lot quicker when running the latest beta of iOS 10.3.4. But that’s where the improvements end with iOS 10.3.2 beta 4 on iPhone 6, with all apps and content seeming to look pretty much neck-and-neck with iOS 10.3.1.

The exact same can be said for iPhone 5 and 5s, with all apps and content being invoked at near identical speeds. Apps like Calendar seem fluid and lag-free whilst scrolling, and interacting with photographs in the Photo app also seems to offer the exact same performance across both versions of iOS. In short, it looks as though Apple has made some internal improvements from a performance perspective with iOS 10.3.2, but as expected, nothing significant that’s worth getting overly excited about.

One real interesting piece of discovery seems to be when the HTML5 test from AnTuTu is run, it finishes faster on iOS 10.3.1 but manages to score higher on iOS 10.3.2 beta 4.

As always, check out the videos for yourself, paying particular attention to how the software performs on your owned device, and see what you think. Are you immediately looking forward to the public availability of iOS 10.3.2?