Apple released iOS 10.3 a few days ago, and as always, those who have installed it are putting the software through its paces while keeping a beady eye on their battery life.

Although installations of iOS can take a little time to settle down following an upgrade, we are now getting to the point where battery life results are starting to become representative of what people can expect in the coming weeks and months, and as always, the folks at YouTube channel iAppleBytes have put iOS 10.3 through its paces to see just how kind, or not, it may be to a host of iPhone models. 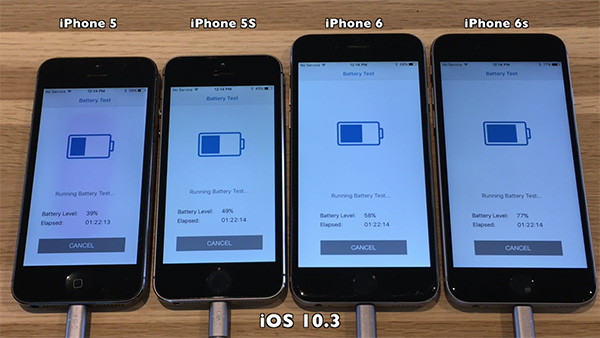 During the video, an iPhone 5, iPhone 5s, iPhone 6 and iPhone 6s are put through their paces, with both iOS 10.3 and iOS 10.2.1 installed on each class of iPhone in order to get a baseline for how the devices perform.

The idea is to put the iPhones through their paces and come up with a metric for how well iOS 10.3 plays with existing iPhone devices with regards to power management and overall battery longevity. After all, some iOS updates have been known to extend the battery life available to older devices, while others have done the complete opposite. Which will be the case this time around?

The method is simple, and involves taking all iPhones and running the Geekbench battery test on them until their batteries expire. We don’t want to spoil all of the fun and tension that the video can afford, but the spoiler here is simple – iOS 10.3 represents a small step backwards as far as battery life is concerned when compared to the iOS 10.2.1 that we have become accustomed to. Is it dramatic? Not at all.

Check the embedded video out below for the stats and figures involved: