Bad news for the jailbreakers amongst us with Apple today having stopped signing iOS 10.2.1 and iOS 10.3, making it impossible to downgrade from iOS 10.3.2 or iOS 10.3.1 using the easier way with iTunes.

Anyone who has updated to the current shipping software is now unfortunately stuck with it, and anyone who has to restore their iPhone or iPad for whatever reason now has to accept that when that happens, they will be automatically updated to the latest version of iOS as a result, unless of course they meet the tricky requirements of Prometheus. 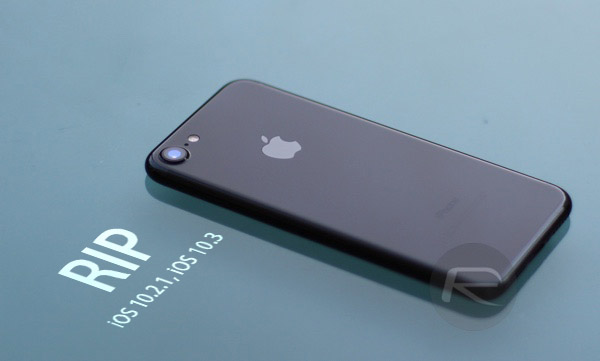 Apple is often known for removing support for older versions of iOS very aggressively, at least as far as new installations and restores are concerned. While apps will obviously continue to work just fine, Apple tends to prevent users from installing versions of iOS other than the most recent not for reasons such as new functionality but in the name of security.

Whether that security is Apple preventing malicious attackers from taking control of a device or stopping users from jailbreaking them, it is always the big concern that leads Apple to stop signing older versions of its mobile operating system.

Once that happens, iTunes will simply refuse to install anything other than the most recent software, preventing downgrades as a result.

It is unknown how long it will be before jailbreak creators step up and create a new jailbreak that can handle Apple’s most recent efforts, but given iOS 10.3’s move to Apple’s new APFS file system, it is possible that such efforts will be hampered for a while. Hopefully, that is not the case, and if there is one thing that we have learned from ten years of jailbreaking, it is to never underestimate the creativity and skill of those who continue to create the jailbreak tools we all use to take control of our iOS devices.