iOS 10 To Feature Apple’s TextEdit App For iPhone And iPad?

It’s amazing what you can find if you pay extremely close attention to Apple’s presentations and slides during its annual Worldwide Developer Conference. The majority of us only really find ourselves concerned with the opening keynote presentation, but it seems that there’s gold to be found in the various sessions that follow as well.

In the “What’s New in Metal, Part 1” session, where Apple introduced new features in the Metal gaming framework, the keen-eyed individuals in the audience noticed a new TextEdit icon installed on the iPad being used to demo Metal’s new tessellation capabilities, possibly indicating that iOS 10 will bring a new stock app to table.

Those who regularly use macOS, or OS X as it was previously known, will have more than likely interacted with the TextEdit app at one time or another. The software is Apple’s very bare bones word processor app that has historically shipped with OS X, and of course, is present and in macOS Sierra as you’d expect.

With that said, we’ve yet to see a mobile version of the TextEdit app for iOS, either for the iPhone, iPad, or as a universal app experience for both. Could iOS 10 be the version of its mobile platform where Apple sees fit to introduce TextEdit as a mobile offering?

If you pay attention to the news around iOS, then you may remember that screenshots of early pre-release seeds of iOS 8 also showed a TextEdit icon parked on the Home screen, as well as what appeared to be a dedicated Finder app for iOS. As we know, neither of those apps have so far made an appearance in any official version of iOS.

Before iOS 8 was actually released to the public there were a few reports suggesting that Apple would introduce both apps into the iOS ecosystem as read-only document viewers for compatible file types. That didn’t ever materialize for one reason or another, but it’s not to say that they will never make an appearance. 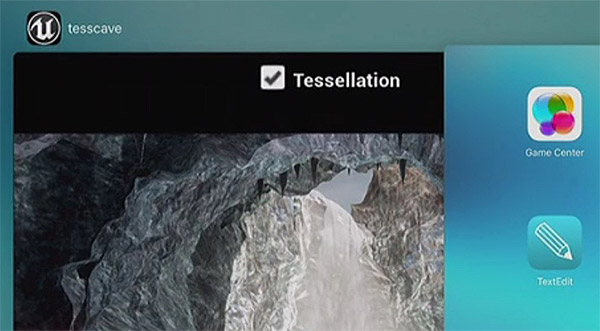 One of the interesting things about the video shown off during the Metal demonstration is that it actually also shows the Game Center app installed on the device, which wouldn’t generally be an issue of contention, expect for the fact that we now know that Game Center app has been removed from the iOS 10 experience. It isn’t beyond the realms of possibility that iOS 10 will ship with a TextEdit app, but we’d hazard a guess that this is yet another red herring.