Apple just can’t stop releasing new versions of iOS 10 right now, with new updates arriving quicker than some can install them. With the iOS 10 big release expected to come around the middle of September, Apple does’t have all that much longer to get its ducks in a row – a fact that likely explains the rapid beta release cycle we are currently witnessing.

Now that Apple has published iOS 10 beta 8 for developers and public beta 7 for testers, people are installing the update to see what’s new, what’s fixed, and importantly, what’s broken. 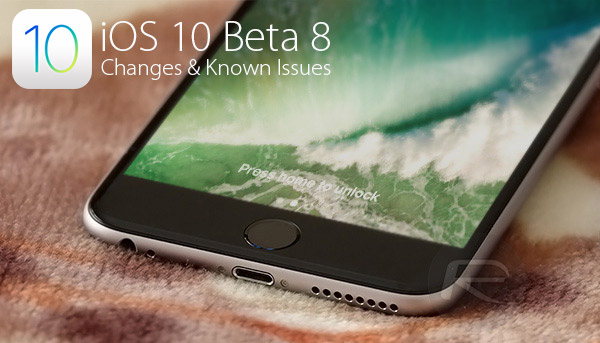 Apple has a history of releasing iOS betas that fix many issues and bring new features to the table, but it unfortunately also has a similar history where breaking things in beta releases is concerned. That’s fine, of course, so long as the issues are fully fixed before iOS 10 proper arrives.

While Apple claims that the most recent beta releases are purely there to squash bugs, the company has also acknowledged that users may have a couple of difficulties once they are installed. Shared as part of the beta release notes, the bullet points below cover what Apple already knows isn’t quite right in developer beta 8 and public beta 7.

– Functionality that requires adoption from App Store apps, such as iMessage apps, SiriKit, and Maps extensions, will not be available until those apps are able to adopt and submit to the Store.

– FaceTime calls between this beta and older iOS and macOS betas are not supported. Please update your Mac and iPhone to the latest version.

– The first time you debug a widget (that is, a Today extension) on a device, it does not show as a possible extension.

With Apple set to announce the next iPhones in a couple of weeks and a full iOS 10 release shortly after, we don’t expect there to be many more beta releases like this. Time will tell whether we are right or wrong on this.