An interview with a top Apple executive is a fairly rare occurrence, but with both the iPhone 5c and the new flagship iPhone 5s in the hands of hundreds of thousands around the globe, the Cupertino company’s biggest names have offered their opinions on some of the topics we all just love to hear about it. CEO Tim Cook, along with Jonny Ive and Senior Vice President of software Craig Federighi, have all given their two cents on the shape of the mobile market, as well as touching on the more sensitive topics like rival Android’s fragmented nature.

Speaking with Bloomberg Businessweek, the trio were pretty buoyant as you might imagine given the circumstances, and considering how infrequently either talk with the press outside of those official functions, it’s quite an intimate look into the mindset of the company’s three most important faces. 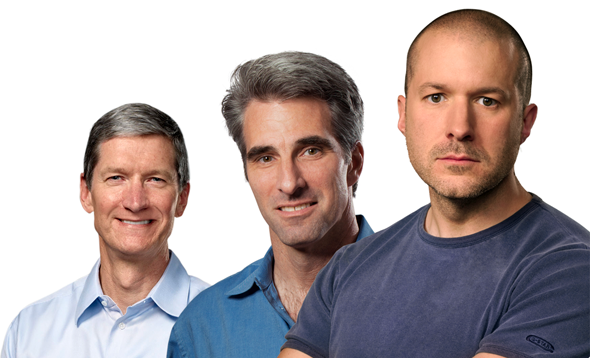 In a market awash with cheaper handsets – particularly in markets Apple is trying to crack, like China – some have questioned whether Apple’s premium product for a premium price ethos would be a sustainable. But while CEO Tim Cook is aware of the recent growth in cheap handset manufacturers, he’s not particularly fazed, noting that "it happens in every market I’ve seen . . in all consumer electronics, from cameras to PCs to tablets to phones to – in the old world – VCRs and DVDs. I can’t think of a single consumer electronics market it doesn’t happen in."

But while Cook was equally undeterred by the fluctuation of Apple Stocks, he was keen to touch upon the subject of Android, and in particular, it’s fragmentation issue. In what he describes as a "compounding problem" affecting both developers and the end user, he sees the issue of fragmentation as also being a big problem for the plugging of security holes:

If you’re not moving your customer base to the latest version, then you have to go back and plug holes in all of this old stuff, and people don’t really do that to a great degree.

Both Ive and Federighi had plenty to say on a variety of topics besides, and the four-page interview is a long but very interesting read. Check it out at the source link, and be sure to leave your thoughts below.