Interesting Infographic Highlights Just How Much Apple Is Worth

Due largely to the success of the iPhone and subsequently, the iPad, Apple’s increased wealth is becoming something of a spectator sport within the tech industry, and although Samsung has recently overtaken its fruit-loving rival in terms of smartphone market share, Apple’s sales continue to rise through the roof – as does its bank balance.

A company renowned for closely-guarded secrets, its sales figures aren’t one of them, and as well as staking a claim to being the largest publicly traded company on the stock exchange, its total sales last year exceeded a mammoth $128 billion. To put things into perspective, that sales figure eclipses the GDP of over 160 different countries across the world, including New Zealand, Iraq and Cuba. 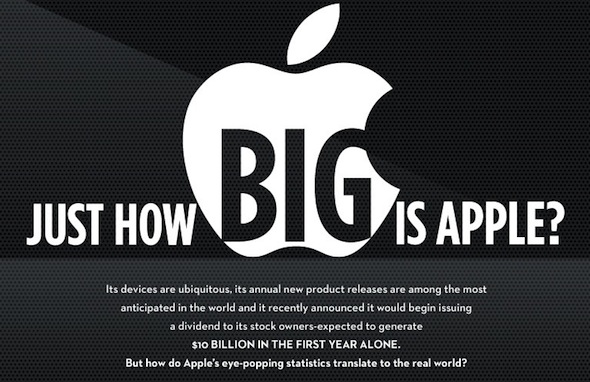 An infographic compiled by BestComputerScienceDegrees site unearths some more fascinating details about Apple’s bank balance. Having sold 3 million units of the new iPad in the first 72 hours alone, the Cupertino-based company is projected to shift 56.4 million in total during the course of this year, which means although Samsung is gathering steam in the smartphone arena, it – along with all other tablet makers – has its work cut out catching Tim Cook’s company on the tablet front.

As well as the facts, the infographic offers some fascinating comparisons in order to really hit home the numbers Apple is managing to achieve right now. For example, the 56.4 million iPads could be top-to-toe between the east and west coast of the US quite comfortably – leaving a generous amount left over.

The iPhone is accredited to 40 percent of Apple’s total revenue, and the collective weight of the 72 million iPhones shifted throughout the course of last year is almost equal to the Eiffel Tower in Paris, France.

iOS only launched in 2008, which to many, will be hard to believe. In total, the infographic reports around 200 million iOS-enabled devices have been sold worldwide, tailgating the total number of automobiles sold across the globe, which sits at 213 million. One could argue that a car is more useful, and while that may be true to an extent, there’s no denying that we’re becoming increasingly reliant on our mobile devices in this Digital Age.

Here’s the infographic in its entirety:

Please share your comments via the usual mediums, you know the drill!