Instagram is undeniably one of the most popular mobile apps available on smartphone devices today. The now Facebook-owned company was classed as innovative and unique in the way it allowed photographs to be captured, edited and shared when it launched back in October 2010. Now, after being owned by social media behemoth Facebook for coming up to four years, the network has announced an overhaul of the app across multiple networks that not only introduces a new app icon, but also brings a redesigned user-interface into the equation.

In an official blog post on the Instagram website, titled “A New Look for Instagram”, the company seemed in joyous and buoyant mood as it introduced the new look and feel for the photo and video sharing app solution. iOS device owners have long been questioning why Instagram hadn’t made the move to a a simpler, flatter and less skeuomorphic app icon that fell in line with the design philosophy of iOS 7 and above, but it now seems that the time has come.

The new application icon for Instagram – while will now take pride of place on the Home screen of millions of iOS and Android-powered smartphones across the globe – is said to have taken inspiration from the existing app icon, with the new icon still representing a camera, albeit a simpler version, as well as containing the iconic rainbow effect in the form of a gradient that splashes across the whole image.

As a side note, there’s also app icon updates for Instagram’s other apps; Layout, Boomerang and Hyperlapse.

If application icons aren’t enough to get you excited, then there’s also a design overhaul for the app itself. The new, simpler design looks to concentrate on what is deemed the most important aspect of the Instagram experience by focusing on the still and moving media that is uploaded on an almost minute-by-minute basis around the world. Navigation within the app remains the same, and therefore continues to breed a sense of familiarity with regular users, but the complexity of the user-interface has been stripped away in favour of a simpler, more clinical black & white approach. 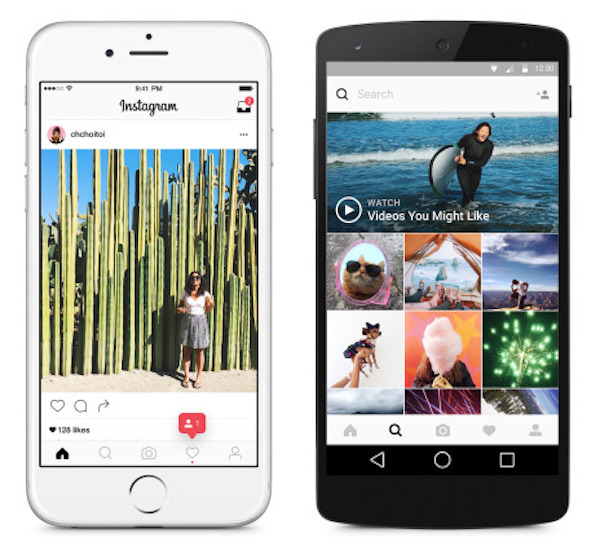 Instagram has grown considerably since its initial launch back in 2010. The global Instagram user-base now regularly shares more than 80 million photos and videos on a daily basis, meaning it’s about time those users had a modern looking app experience that rewards that passion and enthusiasm.

The new updated apps of Instagram for both iOS and Android are live on App Store and Google Play respectively.