Inkflow For iOS Is A Feature-Rich Note Taking App

With all the note-taking and thought-jotting apps available for mobile devices, you could be forgiven for thinking that there wasn’t really any room to innovate. Having gotten through quite a few myself, I was beginning to think this particular category of productivity was becoming an "if you tried one, you’ve tried them all" rigmarole.

Luckily, the intuitive folk of Qrayon weren’t thinking along those lines, and have dreamed up a beautiful notepad app which lets you scribble in a disorganized fashion, before offering a bunch of novel features to help you organize them into something a little easier on the eye – and the mind (!). 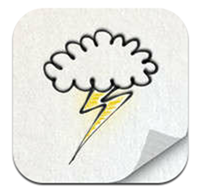 While some people like to take notes to provoke their thoughts, Inkflow is aimed at society’s "visual thinkers," and once you’ve depicted the patterns of confusion passing through your mind, you can easily rearrange and reorganize them in a fluent manner.

If you’ve caught a Galaxy Note advert at some stage, you will see it’s being marketed as a great way to sketch and take notes on the go – true to its name. Inkflow brings that ethos to iOS, and although you’ll probably struggle to get the control offered by Samsung’s S-Pen (fancy word for a stylus), Inkflow does write smoothly – much like a fountain pen. 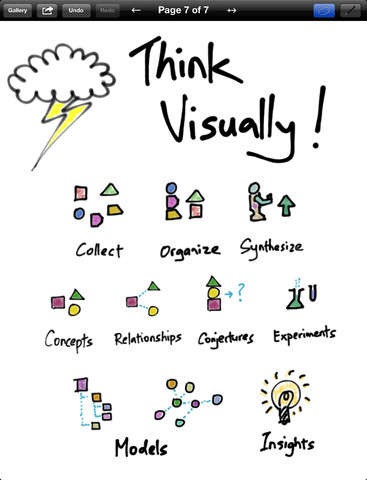 You can move or scale anything in a simple manner, so if the ideas are rolling out quicker than you can organize them, you can use your period of respite to sort everything out and make it appear more coherent. If you want to zoom in or out, it doesn’t lose sharpness, although in my case, the app’s description of a lag-free experience didn’t quite bear fruit. 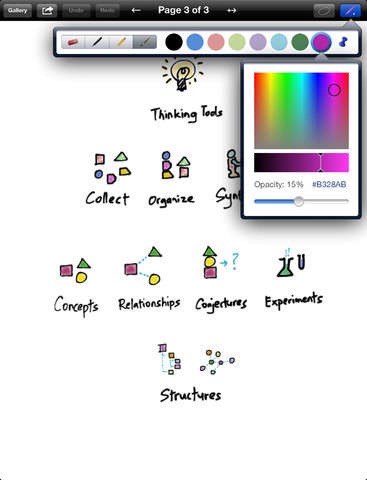 It goes almost without saying that this – and many other apps – look better and offer an enhanced all-round experience on the iPad as opposed to the iPod touch or iPhone, although it still functions rather nicely on the smaller devices.

The app is free, and you can upgrade to the Plus Edition (iPad only) in-app, which includes a full color palette, a pencil, eraser and paintbrush to compliment the fountain-esque pen, as well as a bunch of additional perks.