InfiniBoard for iPhone to be Released in Cydia Today

Chpwn, creator of InfiniDock, and ProSwitcher, will release his newest mod for the jailbroken iPhone and iPod Touch today! It is called “InfiniBoard”, and gives your iPhone’s springboard the ability of vertical scrolling. As you can see in this screen shot, there are icons behind the dock. Not sure how many rows we will get, but this mod will give so much more room on your Springboards. 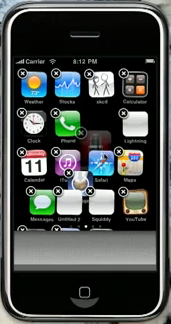 Chpwn has announced that his latest tweak should be available in Cydia at around 5:00pm (PST). This developer’s other iPhone mods have proved to be incredible. InfiniDock gives you the ability to have an large amount of icons on your dock, with up to 10 per page, and the ability to horizontally scroll through them, right on the dock. ProSwitcher, also released by chpwn, works in conjunction with Backgrounder, to give you a “Palm Pre” experience, when switching between apps.

InfiniBoard has had a few delays, but for good reason. Chpwn wanted to make sure this new tweak will work with Overboard and Iconoclasm. Chpwn worked with these other developers to make it happen, and InfiniBoard is now ready for release. I’ll have a review, when I get my hands on this.

UPDATE: Infiniboard is now available in Cydia for $1.99!