As you may or may not know, Apple has begun removing all WiFi stumbler apps from the App Store. Well, one developer, Aspecto Software, has turned to the dark side, to get their App out there. "WiFiFoFum", is now available for free, in Cydia for jailbroken iPhone and iPod touch. 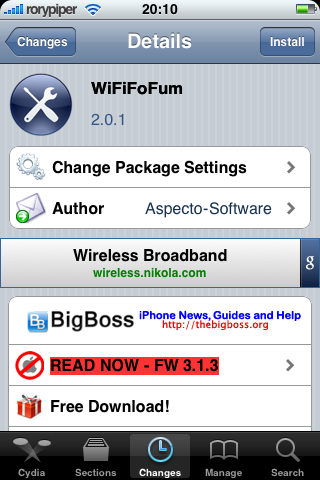 Just 2 weeks ago, we heard the story that all "booby" apps were being pulled from the App Store, in an effort to make the App Store more family friendly. Now, this week, Apple has started pulling all WiFi finder apps. This time they have more of a legal reason to do so. Apparently, these WiFi apps use undocumented, private API’s. This is something Apple does not allow.

Developer Aspecto Software won’t be shut down that easily. They have released their app in Cydia, as a free download. You can go get it now!

We will undoubtedly see other developers go this route, as well. Expect to see more WiFI and "boob" apps show up in Cydia as they get shot down from the App Store. In fact, Infomind, developer of "yFy Network Finder", have said that they will have a Cydia release very soon.