We informed you about Multifl0w app for iPhone that allowed switching between applications running in background in a beautiful Palm Pre style cards flow-like mode. This was nothing but a graphical extension of the already existing app from Cydia called Backgrounder to present all opened apps in a tabbed view, similar to Mobile Safari browser. Almost a month later, a new multitasking app by the name of ProSwitcher was released as Beta that simply outclassed Multifl0w in each and every aspect. 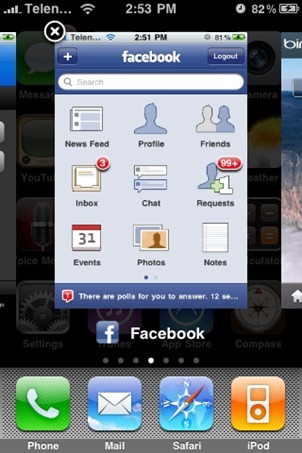 For those of you who dont know, ProSwitcher allows switching between applications running in background in a beautiful Palm Pre style cards flow-like mode which is far superior in its functionality as compared to Multifl0w. This app is now finally out of beta and is released as version 1.0. This final version brings improved performance, some tweaks and best of all, it is completely free to download and install!

You can get the final version from http://booleanmagic.com/repo repository in Cydia.