The lead developer of the popular CynaogenMod has announced that he and his team are working on upping privacy to users by introducing a Run in Incognito Mode feature for apps. Steve Kondik, better known as Cyanogen, is the figurehead behind the famous CyanogenMod custom firmware for Android, and has told of how using the incognito feature will be as simple as ticking a checkbox. Details after the jump!

CyanogenMod is seen by many as the foremost aftermarket firmware for Android devices, and many users follow its progress religiously. As well as being revered and celebrated by most who use it, CyanogenMod is arguably one of the most resolutely developed pieces of software out there. The CM team is pretty huge anyway, and thousands of external volunteers chip in by downloading the nightlies and reporting back to the core developers.

So if you didn’t already know of the ins and outs of CyanogenMod, you’re now fully aware of just how much time and effort goes into its development, and this announcement of incognito mode will only heighten its credentials.

Privacy is of utmost importance to most people, and since we live in a very digitalized world these days, those virtues automatically extend to our smartphones and tablets.

In essence, the Run in Incognito Mode of CyanogenMod will allow users to restrict data when using apps, meaning more control over what kinds of data can be accessed. When the incognito box is checked, empty data will be returned to the app running on strict privacy, which is a definite win for those not looking to spread masses of their personal data unnecessarily. 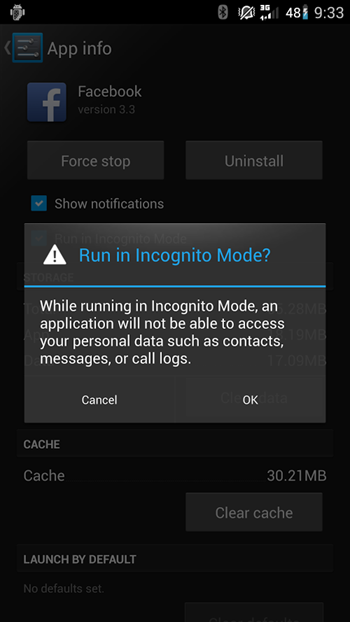 The system can also hide geographic location, and since it runs on a per-app basis, you won’t need to be over-zealous and cripple your device completely for the sake of a little privacy here and there.

In this day and age, people seem to be happy to throw their data around at will, and if people were even half aware of just how much they concede when using their devices from day to day, I’m sure many would be shocked. It’s great to see the CyanogenMod team looking to bring a degree of privacy to proceedings, though, and long may it continue.