Designer Antonio De Rosa regularly churns out some fantastic concepts pertaining to numerous Apple products. Adding to his growing list of great designs comes an all-new iPhone 6 mockup, which looks simply stunning with its large, edge-to-edge display and touch-based home button, and it runs Apple’s iOS 7 beta. Check it out after the break, you’ll definitely love it!

At this point in time, we’ve no idea whether the next generation Apple smartphone will be a rudimentary upgrade from the current iPhone 5, or whether the Cupertino outfit plans to really go to town and overhaul its most prized of assets. If iOS 7 is indicative of the company’s movements in mobile space, one suspects the latter to be true, and as such, an iPhone 6 would seem the more probable outcome. 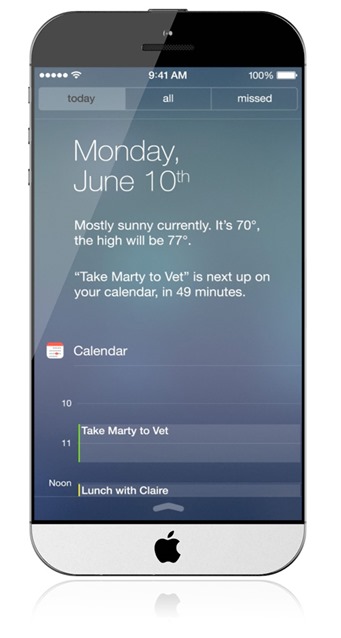 There’s been much talk, mostly unfounded, about what Apple does and does not have planned with the next-gen iPhone, but until we have something really concrete through which to channel our interests, we can only really look in admiration at some of the designs popping up.

De Rosa’s idea of the iPhone 6 is certainly one to be admired, with a beautiful large display nicely finishing off a design which still manages to retain cues from its would-be predecessor. There’s no doubt that the iPhone 5 is already a very beautiful smartphone that doesn’t need heavy modifications, and it is clear De Rosa has kept this in mind when dreaming up this concept. Take a look at the glorious image below:

As well as the display, the device also boasts gesture-based buttons along the bottom, and although this move would be very à la Android, it’s become clear during the past year that Apple is not as afraid as it once was when it comes to following market trends.

With an Apple A7 processor and 18-megapixel camera, De Rosa hasn’t just completely focused on aesthetics, and although the battery implications have not been factored in, we would certainly be happy if Apple did unveil something like this with its next iPhone.

What do you think; is De Rosa’s design worthy of such acclaim? Or have you been looking forward to something inclusive of the as-rumored fingerprint sensor? Do share your thoughts and comments via the usual mediums below!